With just one month to go before Meghan Markle walks down the aisle to marry Prince Harry, here's a look back at the royal couple's most romantic moments

During their public debut as a couple, Prince Harry and Meghan Markle held hands as they strolled into the Invictus Games in Toronto in September 2017.

Harry leaned in as he shared a sweet moment with Meghan during the games.

During the closing ceremony of the Invictus Games, Harry was caught giving Meghan a sweet kiss on the cheek.

The couple was all smiles as they announced their engagement in November 2017.

The newly-engaged couple was glowing for their first official public outing together in Nottingham in December 2017.

In December, Harry and Meghan celebrated their engagement with the release of their stunning official portrait photographs.

The couple looked royally in love in the stunning snaps shared by Kensington Palace.

In a candid shot, the happy couple walks hand-in-hand around Windsor.

Meghan got her first taste of royal Christmas traditions when she joined her fiancé and his family for their annual walk to church in Sandringham.

Harry and Meghan held hands as they greeted an excited crowd outside a radio station in south London on January 9.

They held hands and locked arms throughout the event.

Harry and Meghan said a big “prynhawn da” (good afternoon in Welsh!) to Wales on January 18, where cheering crowds welcomed them to the capital city of Cardiff.

The couple stayed close to each other during the visit.

Harry whispered into Meghan's ear as they toured the city.

And they lit up as they watched a children's dance class during their visit.

The couple spent Valentine's Day eve with a visit to Edinburgh Castle during their first official joint visit to Scotland.

They stayed close as they greeted the excited crowds.

Harry and Meghan cut a stricking figure as they walk through the corridors of the Palace of Holyroodhouse in Edinburgh.

They ended their visit as they started it: arm in arm.

Meghan and Harry share a laugh as they join Prince William and Kate Middleton on stage for the first annual Royal Foundation Forum on February 28.

Harry and Meghan show off their coordinated outfits during an outing in Birmingham on March 8.

They arrived arm in arm as they greeted the crowds.

They continued to sweetly hold hands throughout the event.

Meghan took Harry's arm as they walked into Westminster Abbey on Commonwealth Day on March 12. The event marked her biggest royal debut yet — alongside Queen Elizabeth!

Harry and Meghan were all smiles as they kicked off an unannounced visit to Belfast, Northern Ireland, on March 23.

The royal couple were shown how to pour the perfect pint of Guinness as they stopped into an Irish pub in Belfast.

During the event, Meghan dropped a royal baby hint as they were shown a line of baby products!

They were greeted by adorble children who presented them with flowers.

On April 6, they attended the U.K. Team Trials for the 2018 Invictus Games, to be held in Sydney in October. Meghan announced that she'd be attending the games with her future husband.

The look of love! Meghan glances at her groom during a reception for delegates from the Commonwealth Youth Forum on April 18 — almost one month before their royal wedding. 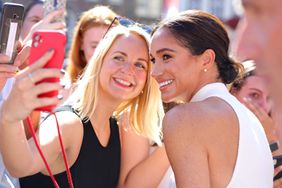