The pair’s first festive season as a royal couple is being marked with the special card, and revealing a new peek at their private wedding celebrations.

In the image, the couple are photographed from behind as they enjoy the fireworks at the royal wedding evening reception at Frogmore House this past May.

In a statement, the palace says, “The Duke and Duchess of Sussex are delighted to share a new photograph from their Wedding Reception at Frogmore House on 19th May.”

Meghan Markle’s Not the Only Bump-Cradler! See All the Royals Who Embraced Their Baby Bellies

“The photograph, which was taken by photographer Chris Allerton, features on Their Royal Highnesses’ Christmas card this year.”

Their office at Kensington Palace released the image on the same day as one from Harry’s brother Prince William and his family.

It has been a momentous year for both princes. Harry and Meghan were married in May and in October — just as they kicked off their tour of Australia, New Zealand, Tonga and Fiji — announced they are expecting their first child, which is due in the spring.

That child will be a cousin to William and Kate Middleton’s three children — including Prince Louis who arrived in April. (Kate also became an aunt to sister Pippa’s son.)

The new year will, too, bring a lot of changes for Harry, 34, and Meghan, 37. They announced last month that they will leave their current home at Kensington Palace and move into Windsor Castle’s Frogmore Cottage, close to the house where their evening wedding party was held and where their engagement photos were taken.

Windsor, located about 30 miles west of London, is a “special place” for the couple, their spokesman says.

The announcement of their move came just days after news broke that Prince William and Prince Harry are considering breaking up their joint “court” at Kensington Palace and creating two separate offices.

With William one day set to be the Prince of Wales – and all that entails as heir to his father Prince Charles – Harry and Meghan will want to forge their own path, so it’s a natural time to split up, insiders believe. (The palace has no comment.)

A Christmas Note from the Queen: See the Royals’ Holiday Cards

She added, “Meghan has very strong views on what she is interested in and that may be what Harry shares, but not what William and Kate share 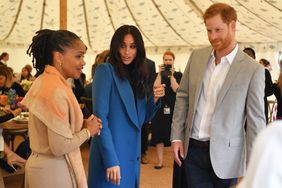 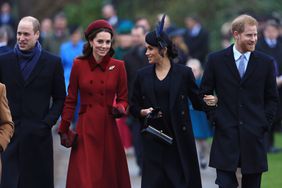