"We are confronted by the true power of the human spirit and the sheer strength of mind to overcome and achieve what most would deem impossible," Prince Harry tells PEOPLE.

Prince Harry is marking his official Netflix debut in a new documentary about one of his most passionate causes.

The Duke of Sussex appears in Rising Phoenix (out August 26), which tells the story of the origin of the Paralympic Games. The documentary was planned to coincide with the 2020 Olympic and Paralympic Games in Tokyo, which have been delayed until next year due to the coronavirus pandemic.

"Rising Phoenix is a story that the world needs right now. We are confronted by the true power of the human spirit and the sheer strength of mind to overcome and achieve what most would deem impossible," Prince Harry tells PEOPLE. "It proves that sport is much more than a physical skill, it is purpose and drive, community and comradery, ambition and self-worth. These athletes are not only a credit to their countries and to their sport, they are also a true testament to human endeavour, and the epitome of resilience.”

In 2014, Harry was inspired to establish the Invictus Games, a Paralympic-style competitive event showing the unconquerable spirit of wounded, ill, and injured servicemen and women.

Speaking from a green couch in the film, the Duke of Sussex, 35, talks about the importance of the Paralympic Games and how “those that are referred to as disabled are not being encouraged or accepted in society at large.”

Referencing Paralympic Games founder Sir Ludwig Guttman, he adds: “What he was doing back then is needed more now than it has ever been.”

In the documentary, Harry also talks about the importance of the Paralympic Games that were held in London in 2014.

“A lot of people, based on what they'd been told, thought it was going to be a failure and that they weren't going to be able to sell tickets,” Harry says. 'The stadiums were packed. The sport was incredible. And what they saw was undoubtedly better than the Olympics themselves."

He continues, “For me and for so many people out there especially young kids to see individuals like that go on and achieve what they have achieved. No amount of books that you read or teaching or class that you can have is going to give you the same inspiration as being able to watch something that you have been told is impossible.”

Harry went on to say, “There are thousands of seats there that could change those people's lives because don't forget, yes lives are being changed on the track but lives are also being changed in the stands as well.”

Of his appearance in the documentary, a spokesperson for Harry said, "The Duke is proud to have been one of the people contributed to this film, which is a unique and powerful documentary that hopes to change the way people view disability — and tell the incredible story of the Paralympics." 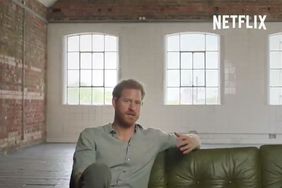