Harry is already so in love with Archie that he "can't imagine life without" his son, he said

Archie Harrison has a special treat in store when he is able to run around! A golden egg-shaped stone with his name on it that will be hidden in his Windsor garden.

That’s the hope of royal dad Prince Harry, 34, who was given the creative gift during a visit to Oxford on Tuesday.

Claire Waldron, who works as a caretaker at the Barton Neighbourhood Centre, created the shiny gift from a varnished piece of rock that she had painted gold and decorated with the newborn’s full name: Archie Harrison Mountbatten-Windsor.

She calls her decorated rocks “kindness stones” — and hides them to be found by children on treasure hunts.

How Baby Archie Could Help Unite Prince Harry and Prince William: ‘They Will Want Their Children to Know Their Cousins’

When Waldron told Harry he could tuck the stone away for Archie to discover in the garden at Frogmore Cottage in Windsor when he is older, the new dad was taken with the idea.

“Can you imagine him finding it and saying: ‘I’ve got a rock and it’s got my name on?’ ” Harry said. “Thank you very much. I love that.”

He then hugged Waldron and patted her warmly on the back and mouthed, “thank you,” as he left the room.

The day had been filled with admiration for the new dad. On his way into the center — his third stop of his day in the city — Harry was inundated with cards and posters to take home to Frogmore Cottage.

“You guys have been busy,” he told the 7-and 8-year-old schoolkids who thrust the cards into his hands. “When I’m awake at 4 o’clock in the morning, I’ll read all these,” he added.

And Harry is already so in love with Archie that he “can’t imagine life without” his son, he said earlier.

When he got home to wife Meghan Markle at Frogmore on Tuesday, the new parents had a visit from Prince William and Kate Middleton — the first time Archie’s uncle and aunt have seen him since he was born on May 6. 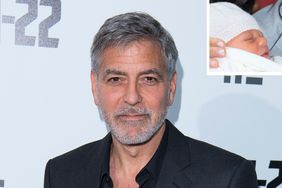