Prince Harry Finally Confirms Archie Has His Famous Red Hair: You Can 'See It in His Eyebrows'

Prince Harry has his very own mini-me!

During Harry and wife Meghan Markle’s outing on Tuesday to the annual WellChild Awards that honor sick children and their caregivers, talk quickly turned to the royal couple’s own baby boy.

Meghan shared that she recently took 5-month-old Archie to his first playgroup, which “he loved.” The royal parents also confirmed that their baby boy has inherited his father’s most recognizable feature: red hair!

“You can see it in his eyebrows,” they said.

Harry and Meghan spent time chatting to Milly Sutherland, 11, and her mother Angela, 50, at a reception for winners of the inspiring awards at the Royal Lancaster hotel in London on Tuesday. The mother-daughter duo asked the couple whether Archie had red hair.

“Meghan said he has and Harry said he definitely is, you can see it in his eyebrows,” Angela said. “Harry said he’d had no hair for five months, but Meghan told him she had taken him to the playgroup and she said there were other children there with the same amount of hair or even less.”

Soon after Archie’s birth on May 6, they were asked whether the baby resembled mom or dad more.

Inside Prince Harry’s Fight to Defend Meghan Markle: ‘He Wants to Protect His Nest’

“Everyone says babies change so much over two weeks,” Harry said. “We’re basically monitoring how the changing process happens over this next month really. His looks are changing every single day so who knows.”

Harry has long poked fun at his ginger status. Just last week, he teamed up with Ed Sheeran on World Mental Health Day, and the two famous redheads wasted no time making fun of themselves.

“People just don’t understand what it’s like for people like us — with the jokes and the snide comments,” Sheeran joked in a video he made with the royal. “I just feel like it’s time we stood up and said, ‘We are ginger, and we are going to fight.’ “ 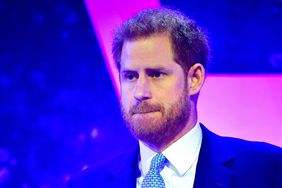