In his younger days Prince Harry developed a hard-earned reputation for being something of a party animal.

Yet a night of wild drinking was just about the last thing on his mind at The Stables Bar in Perth, Australia, on Wednesday evening.

Instead, Harry, 30, was far more interested in preparing for what awaited him on Thursday morning – a grueling week of training with the fearsome Australian SAS.

“Harry had one beer, then drank water for the rest of the night,” bar owner Tim McLernon tells PEOPLE.

“We asked him if he wanted another beer and he just said, ‘No thanks, I’ve got training in the morning and one’s enough.’ ”

“I know that Harry was training at 5:30 a.m. this morning with the SAS guys. The Swanbourne Barracks is right on the beach, so I would have thought he would have had a very full-on training session.”

McLernon added, “I certainly wouldn’t go training with the SAS with a stomach full of beer!”

As for Harry’s dinner, he tucked into smoked pork with spiced bourbon, sweet potato purée and white cabbage slaw, followed by a specialty platter of eight traditional Australian desserts.

Like any other customer, he split the cost of the meal with the rest of his party, which was made up of fellow soldiers, by dipping into his own wallet – and leaving a large tip for the waitstaff.

“We had organized special treatment for Harry and a couple of private spaces but he said, ‘No, thank you,’ ” adds McLernon.

“He just looked around and picked a table in the middle of the restaurant. Nobody really noticed it was him at first. He just had some jeans on and a cap and a normal top, so he just looked like a normal West Australian bloke.

“He was super friendly. There were about 220 people in the restaurant and he was just like anyone else,” says McLernon.

Harry – or Captain Wales, as he is known in the Army – will now spend a week training with the SAS in the heat of Western Australia.

It is the second part of a four-week military placement with the Australian Defense Force, which has already seen Harry undertake survival training on helicopter simulators in Perth.

He will later move north to Darwin and go on patrol with members of Norforce, an infantry regiment of mainly Aboriginal soldiers.

The Aussie trip will be Harry s last overseas placement before he leaves the British Army in June after 10 years active service and two tours of Afghanistan.

It will also mean that Harry will not see Kate Middleton and Prince William‘s second child until he returns to Britain in late May.

Why Queen Elizabeth Won’t Be Woken Up for the Birth of Royal Baby No. 2

“They looked like they were having a great time,” adds McLernon.

“Harry only flew in a few hours before, so I’m sure he was pretty jet-lagged, but he was just getting to know the guys he’s going to be with for the next eight or nine days.

“They looked like they had a great time. Like anyone else, they had a good laugh, had a good meal together and just got to know each other a little bit.

“They stayed pretty sober. But in Australia it would be rude to not have at least one beer!” 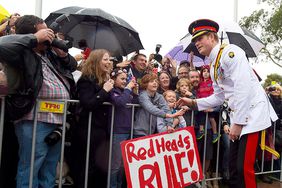 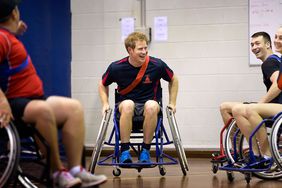