Prince Harry Designed the Toilets on His South Pole Trek

"I'd be sitting there, looking at a beautiful view thinking, 'This is the royal flush!' " says actor Dominic West

Call it a royal flush.

Prince Harry has shown a surprising talent for building his own throne – outdoor toilets in the freezing Antarctic.

The industrious prince, 29, took the creative lead in constructing intricate designs for his fellow adventurers at the South Pole last month, it was revealed Tuesday, as Harry, the patron of the Walking with the Wounded charity expedition, was reunited with some of the 12 injured servicemen and women and others who spent 13 days with him in the frozen south.

The Wire actor Dominic West, though on a rival team of Harry’s, said he enjoyed the comfort of the Prince’s designs.

“They had a flag pole and a loo roll holder that were surrounded by blocks of snow,” West, 44, said at the reception.

“He must have taken 45 minute to create each one.” (Alexander Skarsgard, who was on the trek, took a memorable photo posing on one of the loos.)

Explaining how Harry worked, West said the Prince would dig a hole at the chosen spot along with a “platform to squat on. He built these incredible intricate ones. He did art A level [in high school] – you can tell he has the artistic touch.”

West added, “I’d be sitting there, looking at a beautiful view thinking, ‘This is the royal flush!’ ”

West also revealed how Harry told “eye-wateringly rude jokes. For the non-soldier like me it was quite shocking,” he said with a smile.

West said they lived on military rations during the charity ski trek, which was originally set up as a race between a Commonwealth, U.S. and British teams until it turned into a joint mission when bad weather made it too dangerous to race.

Harry, who has shaved his beard before taking a desk job with the army in London, said at Tuesday’s press conference, “Our wounded, injured and sick don’t want pity – they just want to be treated the same way they were before they were injured, with respect and admiration.”

He also joked that the U.K. team had, in fact, won the trophy.

“We had a chat and decided to share it out amongst everyone else!” he said. “To the Australian group if you are watching … Sorry.” 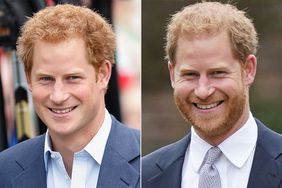 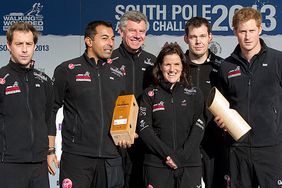 Prince Harry Bids Farewell Ahead of His South Pole Adventure 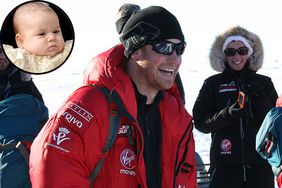 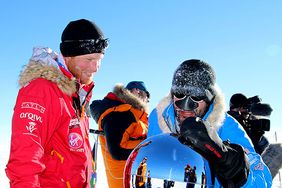 Prince Harry Arrives at the South Pole: 'It's an Amazing Feeling' 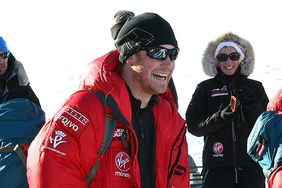