Sergeant Elizabeth Marks, a (happily married) 25-year-old from Arizona, wants Harry to give her medal for the 100-meeter freestyle to Papworth hospital in Cambridgeshire, England – as a thanks for saving her life two years ago

Prince Harry set the internet abuzz after he charmed a champion swimmer at the Invictus Games as he awarded her a gold medal on Wednesday night – and the U.S. Army soldier gave it right back to him.

But all is not as it seems. Sergeant Elizabeth Marks, a (happily married) 25-year-old from Arizona, wants Harry to give her medal for the 100-meter freestyle to Papworth Hospital in England – as a thanks for saving her life two years ago.

Just before the first Invictus Games of 2014, Sgt. Marks became ill with a serious lung condition and had to be put into an induced coma in London.

She told reporters of her ordeal: “I landed in London and became very ill very rapidly, I was in hospital in London and went into respiratory distress syndrome, they shipped a team down from Papworth who put me on to ECMO [extracorporeal membrane oxygenation] life support and that ultimately saved my life.

WATCH: The Best Moments From Prince Harry’s Visit to The U.S.

“And when they did so I was on it for 10 days and ended up waking in an army hospital in Germany having no idea what had happened.

“But they absolutely saved my life and I can’t thank the UK enough for having that kind of medical support and taking such good care of me.

“So I gave Prince Harry one of my medals and hope it will find its way back to Papworth.”

Like most hospitals in the U.K., Papworth is part of the publicly-funded National Health Service and she praised the care she received.

Dr Roger Hall, Medical Director at Papworth Hospital told PEOPLE in a statement, “The team here at Papworth is extremely proud to hear that Elizabeth has asked to donate her medal to Papworth, this is extremely generous and unexpected. Our pioneering and innovating ethos allows us to offer some of the U.K. s most advanced treatment for heart and lung disease and this news will mean a lot to all the staff at Papworth who work tirelessly to provide the very best care possible to our patients.

“Elizabeth s fantastic achievement is a good example of how modern medicine can support all of us to not only lead a normal life, following life-threatening conditions, but go on to achieve truly amazing accomplishments.”

Claire Tripp, Interim Chief Executive at Papworth, added her delight at the gold medal win. “Our staff pride themselves on offering the very highest standard of patient care and we are all delighted to hear of Elizabeth s extraordinary achievement. We wish Elizabeth the very best and would very much like to meet with her so we can thank her personally.”

Sgt. Marks has been in the U.S. Army since she was 17. She suffered a serious hip injury in 2010 which left her with no sensation in her left leg but she fought back to fitness and still serves in the military.

And she’s an ace sportswoman. She netted gold in all four swimming events she entered at the Invictus Games in Orlando this week. “It’s just an honor to be here and stand next to all the other soldiers, I can’t think of anything else I’d rather be,” she added.

“I was a little apprehensive, I was nervous because of what had happened last time but I was eager to perform and show my team and show the other countries how much I love their support.” 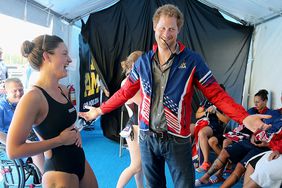 Elizabeth Marks, Swimmer Who Returned Her Gold Medal to Prince Harry, Calls Him a 'Good Human Being' 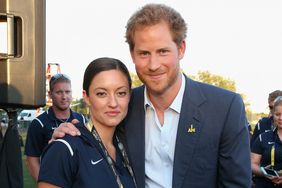 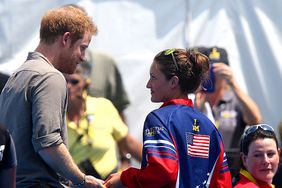 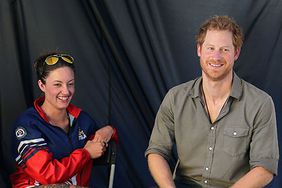