Prince Harry Takes the 2018 Invictus Games Down Under to Sydney

Prince Harry announced that the 2018 Invictus Games would be held in Sydney, Australia for 11 days, beginning Oct. 18, 2018

The Invictus Games are going down under!

On Saturday, Prince Harry announced in an inspiring video message that the 2018 Invictus Games would be held in Sydney, Australia. The fourth outing for the annual event will run for 11 days, beginning Oct. 18, 2018 and ending Oct. 29, 2018.

The title comes from the Latin word Invictus, meaning unconquered or undefeated.

Over 500 competitors from 17 nations will compete at the 2018 Games in 11 different adaptive sports, including wheelchair basketball, swimming and indoor rowing. Events will take place across the Greater Sydney area — from the Sydney Olympic Park to on and around the iconic Sydney Harbour.

Harry, 32, previously said he was inspired to create the Invictus Games after watching the Warrior Games in the United States during an official visit in 2013.

He launched the first Invictus Games at London’s Queen Elizabeth Olympic Park after just 10 months of planning. The second annual Games took place in Orlando, Florida, in May — while the third annual Games are scheduled for September 2017, in Toronto, Canada.

In his video message Saturday, Harry — the Patron of the Invictus Games Foundation — said the host city had to be a place “known the world over,” had to have “a proud military heritage which would welcome competitors form all the world with open arms,” and had to be a place with residents who are “absolutely sports made and would really get behind our competitors.”

“It was an easy decision really,” he said — standing next to Invictus Games Sydney 2018 Ambassador and Wallabies captain Stephen Moore, as well as members of the Australian Defense Force members from all three services at the Tourism Australia offices in Australia House, London.

“You don’t need to tell the Aussies to bring it,” she added. “It’s guaranteed — no worries!” 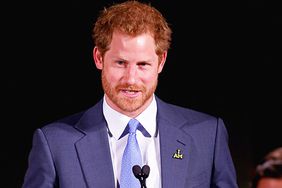 What Are the Invictus Games? Everything You Need to Know About Prince Harry's Passion Project