George & Charlotte s big day out! Marked by country warmth and classic style, the royals celebrate a christening fit for a princess. Subscribe now for an exclusive look inside the special day – only in PEOPLE!

Not only does nanny Maria Turrion Borrallo live at Kensington Palace with our favorite royal family, but she also gets to frolic in the park with Prince George – which is pretty much our dream job.

Since joining the Cambridge family in 2014, our obsession with Borallo has only grown even more supercalifragilisticexpialidocious.

Prince George’s nanny looked like she flew off the pages of P.L. Travers’s classic, Mary Poppins, at Princess Charlotte‘s christening on July 5. Borrallo channeled the magical English nanny in a bowler hat and white gloves as part of the traditional uniform of Norland College – the university where she received her top-tier training in childcare. All that was missing was an umbrella.

2. She has excellent taste in (baby) clothing.

Borrallo likely gifted newborn Princess Charlotte a Spanish-made baby bonnet by Irulea that she wore for her big public debut from the Lindo Wing in May. Irulea’s owner previously told PEOPLE that Princess Charlotte’s bonnet “is extremely artisanal and handmade,” describing it as “the most handmade thing in our store.” Style points for the royal nanny.

3. She brought us an adorable Prince George moment.

Had it not been for nanny Maria, the world might have been deprived of one of Prince George’s cutest attention grabs – the infamous tongue-wagging photo. During Trooping the Colour on June 13, Borrallo held the royal toddler up close to the Buckingham Palace window, where he showed off his excitement as he watched his mom Princess Kate and dad Prince William in the parade below.

4. She gets to travel the world with the royals.

Holiday with Kate and Will? Yes please! Borrallo has accompanied the Cambridges on several trips, including their royal visit to New Zealand and Australia last year, where she made her first public appearance. Prince George’s nanny also joined Kate in the Caribbean earlier this year when she and her family jetted off to the island of Mustique.

5. She shares laughs with the Queen of England

Giggling with Queen Elizabeth – no big deal. Borrallo was photographed sharing a playful moment with Prince George’s great-granny at Charlotte’s christening. Which may be her most magical feat of all! 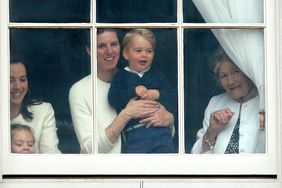 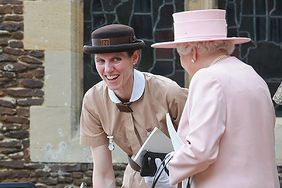 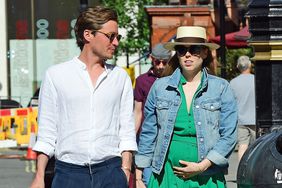