On Friday, the nearly 3-year-old prince joined his parents for the first time during one of their official royal engagements in the United Kingdom.

George, who wore noise-blocking ear protectors, pointed at planes in the sky, waved to visitors and seemed especially fascinated by the tail rotor of a helicopter.

“I imagine his father has told him about helicopters, so he knew what that was called and kept saying, ‘tail rotor.’ It was good to see his technical knowledge! Some training going on early!” Flight Lieutenant Jim Hobkirk tells PEOPLE.

He and his parents arrived shortly before midday. Getting out of the couple’s Range Rover, the future king seemed apprehensive with all that was going on and looked at his mom – who rewore a Stella McCartney dress and Smythe blazer – to be picked up.

Momentarily craning over her shoulder, he pointed out the noisy jets circling the air field and waves over at the crowds at the fence about 50 yards away.

The royal parents took him along a line up of RAF cadets, who gave him a little blue “savings pig” – a souvenir of the organization’s 75th anniversary.

“He said, ‘Thank you.’ He was very sweet. I said, ‘I hope one day he will be an air cadet.’ He was so cute. He seemed more interested in the airplanes,” Cadet Sgt. Eleanor Horton tells PEOPLE.

Adds Air Commodore Dawn McCafferty, “”He was pointing out the aircraft in the sky. He’s clearly interested. The Duchess said to thank the air cadets for the work they’re doing here. She’s a great patron.”

After being greeted by Air Marshall Sir Kevin Leeson, Chairman of the RAF Charitable Trust, and Air Chief Marshall Andrew Pulford, Chief of the Air Staff, RAF, the family was taken to see one of the world famous demonstration planes, the RAF Aerobatic Team’s Red Arrow Hawks.

The family then had a close look into the cockpit of a Squirrel helicopter – the same aircraft pilot William trained in when based at RAF Shawbury in 2009.

When they got into the aircraft, Kate sat with George in the back – and not at the controls – as George appeared nervous.

“He seemed overawed with the noise and being inside a helicopter. It was a lovely family moment,” Hobkirk says. “We shut the doors so they could have a quiet moment to themselves. The Duke was telling him, ‘I used to fly these.’ George was very quiet.”

“The Duke was trying to pointing out things,” Hobkirk adds. “Everyone was just trying to keep him happy. There was a lot going on for him with the noise from all these airplanes. He seemed quite subdued in the end.

“They wanted to put him on the Duke’s lap [at the controls], but he was having none of it. The Duchess suggested shutting the door to try to persuade him. But he was happy sitting with his mum.”

Hobkirk says of the young family, “They seemed very relaxed. The Duke said he misses flying and he wishes he could fly more and said he was envious of me.”

Kate was “concentrating on trying to make the young prince happy,” he adds.

The event is staged in support of the Royal Air Force Charitable Trust, which aims to support the RAF and encourage interest of the aviation industry among young people. The Air Tattoo’s theme for 2016 is “The Next Generation: Inspiring Innovation.”

The couple has strong links with the RAF. William served in the RAF as a search and rescue pilot on Anglesey, Wales, for several years including the first years of the couple’s married life.

And Kate took over her role as Honorary Air Commandant of the Air Cadets from Prince Philip in December and has been taking part in celebrations to mark their 75th anniversary. 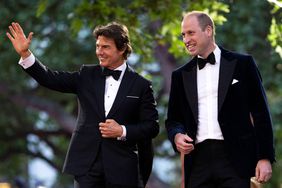 Prince William Had a Rare Fashion Moment at the 'Top Gun' Premiere with Perfectly Themed Shoes!