There’s a new king-to-be ready to rule the school. Preschool, that is.

The royal 2-year-old is attending the Westacre Montessori School in Norfolk, which is a short drive from the family’s grand country mansion, Anmer Hall.

William and Kate, both 33, have released two photographs (which mom took herself!) to mark the special occasion. In the images, George sports a new blue backpack and his adorable golden curls as he stands in front of a mural outside the school. The little prince is bundled up in a quilted navy jacket from John Lewis that sells for around $50.

George, who looked confident striding in, is expected to attend school a few days a week.

“It went well,” a palace source tells PEOPLE of the prince’s first day.

Westacre Montessori is named after Italian educator Maria Montessori (who was the first woman in Italy to receive a medical degree), and encourages freedom of thought. Children are also taught in mixed age groups. The school, which is a converted chapel, costs $55 a day and is located on a private road.

As a child, George’s father William attended the private Mrs. Mynors’ Nursery School in Kensington, which also followed the Montessori method. Kate attended the pre-school at Bradfield Southend in Berkshire.

The school’s location in Norfolk is convenient for the family of four. William is mainly based in the area while he continues his job as a helicopter pilot in the East Anglia Air Ambulance service.

The move confirms what friends have told PEOPLE – that the couple “want to educate their children initially up there.”

“They looked at a few schools and they thought it was the best for place George. They felt in terms of education, the feeling, the teachers and the location – the whole thing made it the ideal fit for him,” the royal source continued.

The royal tot will attend the program on a part-time basis.

“There’s no set format, but it will be roughly around a couple of days a week,” a royal source told PEOPLE.

George and sister Princess Charlotte are usually with the couple, so when they come to London for extended periods of work, he will likely not be at the school. 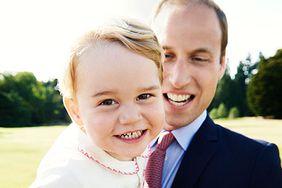 Prince George Is Off to Nursery School! All About His Royal Enrollment