In the sweet exchange, the three little royals ask TV icon and naturalist, Sir David Attenborough, a question each — lending their young voices to help raise awareness to the challenges of the natural world.

First up is George, 7, who says, "Hello David Attenborough, What animal do you think will become extinct next?" Attenborough says he hopes that will not happen.

Following George's confident and clear voice, comes Charlotte, 5, slightly nervy, asking, "Hello David Attenborough, I like spiders. Do you like spiders too?"

In one of the video's most adorable moments, Louis, 2, asks the broadcaster what kind of animal he liked best, while showing off a sweet way of pronouncing the word animal.

For his part Attenborough follows up with child-friendly informative answers.

The video marks the first time that many people have heard the future heir and his siblings speak. A few spoken words have been captured in the past, such as when the children explored their mother Kate Middleton’s garden at Chelsea Flower Show last year. And crowds and onlookers at events like Charlotte’s royal christening and royal tours have enjoyed the odd snippet of George's voice as he has grown up.

"The Duke and Duchess of Cambridge are pleased to share a short video clip of Prince George, Princess Charlotte and Prince Louis each asking Sir David Attenborough a question about the natural world," the palace said in a press release.

But this was a very different moment for royal fans to hear them speak clearly for the first time. And more significantly, it marks the children's gentle immersion into royal duty, as the video was released via his parents' Kensington Palace social media accounts.

The appearance is all part of an ongoing move to highlight the plight of the natural world. Last weekend, George’s parents Prince William and Kate Middleton released adorable images of the family in the garden at Kensington Palace meeting one of their favorite TV stars, Sir David, 94.

On that memorable occasion, George was given a fossilized tooth from a giant shark by Sir David — something that briefly caused controversy back in the Mediterranean island of Malta where the TV documentary maker had found it during a vacation in the 1960s.

Prince William Unveils Ambitious New Environmental Mission: 'The Earth Is at a Tipping Point and We Face a Stark Choice'

Last week, William, 38, explained how important his longstanding campaigning on behalf of endangered wildlife was — especially now that he is a father. In a new documentary, Prince William: A Planet for Us All, that airs in the U.K. on ITV on Monday, the Duke of Cambridge says he wants to be able to tell his 7-year-old son that he did what he could to help the planet.

"I really want to make sure that in 20 years, George doesn't turn around and say, are you ahead of your time? Because if he does, we’re too late," William, 38, says in the show.

The father of three speaks about how his mission has become even more personal since he became a parent and how he wants to leave behind a better world for future generations. 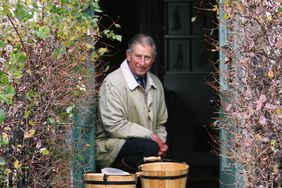 Prince Charles Is So Nuts for These Backyard 'Creatures' That He Lets Them in His House!