Kate called the number 55, reminding her of Prince George

Prince George may be the future king, but like any other 6-year-old, he can't resist the allure of creepy critters.

Kate Middleton and Prince William surprised nursing home residents in Wales this week as guest Bingo callers via Zoom. The royal parents called out each number along with the accompanying traditional Bingo nickname — and one number's silly rhyme reminded her of their eldest son.

"George would like this one — five and five, snake’s alive," Kate said as she called the number 55 and held up the ball to the camera, hinting that Prince George has developed an interest in snakes.

The Duke and Duchess of Cambridge frequently share George's interests, hobbies, and what he's learning at school, especially during royal engagements with young children. Last year, Kate shared that her son was learning about space, while Prince William previously shared that Prince George is "obsessed" with "playing on tractors."

"George gets very upset because he just wants to do all of Charlotte’s projects," Kate said. "Spider sandwiches are far cooler than literacy work!"

During their Bingo game, William chose a ball and held it up to the screen, calling out: “Two little ducks, number two,” followed by Kate calling out the next two balls: “Eight and seven, 87. Six and two, tickety-boo," she said, using the traditional lingo.

"Are we drawing these numbers badly?" William then asked as the group laughed.

Kate Middleton's New Jewelry Obsession! All About the Earrings She's Worn on All of Her Zoom Calls

As they spoke to residents after the game, Kate told Margaret Stocks, “Hi Margaret. Lovely to meet you, how did you get on?”

Stocks responded, "We won one line in the Bingo,” to which Kate replied, “Oh fantastic, well done!"

Kate, 38, and Prince William, 37 — who are quarantining at their country home of Anmer Hall with their children Prince George, Princess Charlotte and Prince Louis, 2 — have been focused on how nursing homes and those working in them are coping amid the coronavirus pandemic.

Before the game, William and Kate chatted with staff members about the impact of the virus and the challenges that they have faced as a result of the pandemic.

“If there’s hopefully some positivity that comes out of this horrendous time, it is that there’s a light shone on all of the wonderful things you all do and on the social care sector, and it allows people to acknowledge, respect and appreciate everything that you are doing," William said during the call. 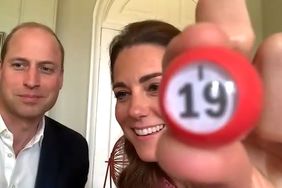