Prince George is a mini survivalist in the making!

TV star and famed adventurer Bear Grylls won the King’s Cup Regatta on Thursday, sailing past Kate Middleton and Prince William to capture the title for Tusk Trust. But it was his reveal about the royal couple’s 6-year-old son during the awards ceremony that really raised eyebrows.

While holding onto the trophy, Grylls told the crowd that George was following in his survivalist footsteps. “And also Prince George, your first ant you ate today,” he said. “And that is a great moment. Well done, you.”

Kate and William, both 37, were clearly amused by their son’s bravery, letting out a laugh from the side of the stage.

Eating ants is a far cry from the “cheesy pasta” that Prince George and 4-year-old sister Princess Charlotte help their mom make in the kitchen.

“[Kate] was telling us how much her children love cooking and how they cook for her,” Matthew Kleiner-Mann, chief executive of the Ivy Learning Trust, told reporters after the Duchess of Cambridge’s February visit to the Lavender Primary School in support of Children’s Mental Health Week. “They made cheesy pasta the other day. One stirs the flour, one puts the milk and butter in. And they make salads and stuff.”

While cheering on his parents during their charity sailing race, the little prince stole the show in a captain’s hat and nautical striped shirt. But that wasn’t the only thing that got royals fans talking — Prince George also showed off a big grin, including a big gap where his front two teeth had fallen out!

George and Charlotte watched the action from a boat under the watchful eye of their grandparents, Mike and Carole Middleton. Prince Louis, 1, was also on the Isle of Wight for the event, likely in the care of the family’s trusted nanny, Maria Teresa Turrion Borrallo.

Princess Charlotte was able to give a glimpse of her cheeky side when Kate brought the kids to a window above the stage where prizes were to be awarded. Instead of waving to the crowd, the 4-year-old royal decided to stick out her tongue — which mom Kate quickly tried to stop her from doing.

Eight boats took part in the race, each representing a charity being supported by the royals. This year, Kate’s four charities that were represented are Action on Addiction, Place2Be, the Anna Freud National Centre for Children and Families and The Royal Foundation. Child Bereavement UK, Centrepoint, the London Air Ambulance Charity 30th Anniversary Campaign and Tusk, four causes for which William is a patron, also competed. Tusk Trust, with Grylls at the helm, won the first race, with Prince William coming in third and Kate placing seventh. William’s team came in fifth during the second race, while Kate’s team was disqualified for starting too early. 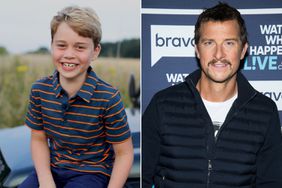