Prince William enjoyed his first Father’s Day Sunday, playing polo while wife Kate and their son, Prince George, cheered him on from the sidelines.

In a delightful family scene that played out in the English countryside, 100 miles west of London, George enjoyed seeing the ponies and playing in the grass.

William, 31, took part in a charity match against a team that includes his brother, Prince Harry, at Cirencester, Gloucestershire, not far from their father’s country home Highgrove in Tetbury.

But George appeared to have little interest in the game. He spent much of the time practicing walking, with mom Kate leading him around a tent set aside for players.

At times, the Duchess held him in her arms but when the Prince, who turns 1 July 22, got restless, she put him down to crawl on the lawns at Cirencester Park Polo Club.

He walked with his arms held out as Kate (who wore jeans and a Breton-style top) held him up by his little hands.

William was helping to raise money for the homelessness charity Centrepoint, for which he has been a patron since 2007, following in the footsteps of his late mother Princess Diana, who took her two young sons to see homeless shelters before she died in 1997.

Two other charities – Well child, which Harry supports, and Child Bereavement UK, another of William’s causes – were also beneficiaries.

The polo outing came a day after Kate and Princes William and Harry as well as other senior members of the royal family helped mark the birthday of Queen Elizabeth II with the Trooping the Colour ceremony in London. 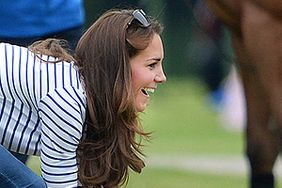