11 Photos That Prove Prince Charles and Camilla Have More Fun Than Any Other Royals on Tour!

Prince Charles and Camilla are making the most of their 12-day tour of the Caribbean, from walks along the beach to shots of rum

Prince Charles had Lionel Richie laughing all night long. The Queen's eldest son met with Richie at the Coral Reef Club Hotel in Barbados to officially name him as an ambassador for The Prince's Trust International.

Charles thanked the singer for taking the position – and added in a quip quoting Richie’s 1983 hit “Hello.” The royal told him, “It must have been you I was looking for."

“Oh, did you just say that?” Richie replied, feigning shock. “He did say that.”

During the fourth day of their 12-day tour, the royal couple stopped off in Kingstown, which is the capital Saint Vincent and the Grenadines, for a full day of events surrounding female empowerment and environmental preservation.

After making their arrival, Camilla — who opted to stay cool in the Caribbean heat by wearing a light pink kaftan and flowy white pants, accessorized with a matching white parasol — was handed a shot of passion fruit rum to celebrate her visit.

Prince Charles got acquainted with a parrot during his visit to the Botanical Gardens during a stop in St. Vincent and the Grenadines.

The British heir kept the beat at a reception at the Government House in Nevis, St. Kitts.

The royal couple took in the sights of Grenada during a stroll along the beach.

Charles climbs into the ring during a visit to Rafael Trejo Boxing Gym, where he viewed a training session and met boxers, including young students.

The Duchess of Cornwall receives a kiss on her hand from a human statue during a guided tour of Old Havana during the duo's historic visit to Cuba.

The pair arrived to a British Classic Car event in Havana, Cuba, in style – in a black classic convertible!

Charles shared a laugh with local bikers at the British Classic Car event in Havana.

Prince Charles didn't hold back when he was tasked with grinding sugar cane in Havana!

Charles and Camilla had fun learning how to mix the perfect mojito during a restaurant visit. 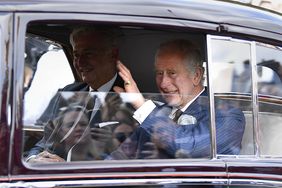