Prince Andrew has discreetly taken down his personal website.

The Duke of York, 60 — who stepped down from frontline royal duties in November over the "major disruption" caused by his links to disgraced financier Jeffrey Epstein — previously highlighted his work through thedukeofyork.org.

The site included details of his business initiatives, naval career and key charity initiatives, alongside links to profiles of daughters Princess Beatrice and Princess Eugenie.

Now the website automatically redirects users to Andrew's official page on the royal family's main website royal.uk, where his biography is listed alongside those of Prince William, Kate Middleton, Prince Harry and Meghan Markle.

However, one thing has remained constant. As was with Andrew's old website, the "About The Duke of York" page on royal.uk leads directly to the statement provided by the royal after his disastrous interview with BBC Newsnight host Emily Maitliss, which directly prompted the collapse of his official royal role.

He was later forced to give up links to hundreds of charitable patronages and move his personal office out of Buckingham Palace.

"It has become clear to me over the last few days that the circumstances relating to my former association with Jeffrey Epstein has become a major disruption to my family’s work and the valuable work going on in the many organisations and charities that I am proud to support," Andrew wrote.

"Therefore, I have asked Her Majesty if I may step back from public duties for the foreseeable future, and she has given her permission."

The website redirect is the latest step in this process of withdrawal. While the royal’s Twitter and Instagram accounts remain active the Internet Archive shows the redirect was set up sometime between May 11 and June 25.

The change happened before the FBI arrest of Ghislaine Maxwell, the former companion of Jeffrey Epstein's, on July 2 in Bedford, New Hampshire.

On Tuesday, it was revealed that the British socialite and heiress is married but has declined to reveal her spouse’s name, according to prosecutors at her arraignment in New York.

In a court filing obtained by PEOPLE, Maxwell’s attorneys asked for her to be released on a personal recognizance bond of $5 million “co-signed by six financially responsible people, all of whom have strong ties to Ms. Maxwell.” But a judge denied the request Tuesday, ordering her to be held behind bars.

Her trial is scheduled for July 2021.

In early June, federal prosecutors in New York also reportedly made a formal request through the U.K. to speak with Prince Andrew as part of their criminal investigation into convicted sex offender Epstein. 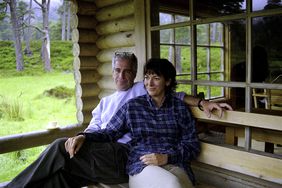