Despite her baby bump, Beatrice also grabbed a shovel and helped bury a time capsule!

Princess Beatrice isn't letting her pregnancy slow her down!

Queen Elizabeth's granddaughter, who is expecting her first child with husband Edoardo Mapelli Mozzi this fall, stepped out last week for a busy visit to Forget Me Not Children's Hospice. Despite her growing baby bump, Beatrice grabbed a shovel and helped bury a time capsule to celebrate the 10th anniversary of Russell House.

The royal also met with some of the hospice's families, staff and volunteers — including a baby boy who seemed completely charmed by the princess! In a photo shared by the organization, Princess Beatrice and the baby, dressed sharply in a tiny bow tie and overalls, exchange giant grins.

"In the last 10 years, the charity has supported over 800 families — I am simply lost for words as to the difference that this support has made to so many lives," Princess Beatrice, 33, said in a statement.

"When people ask me why I became the patron of this amazing charity, I only have to explain how much of an important part of the community Russell House and the charity has become. And how much of a momentous achievement it is for us to be stood here today celebrating 10 years of supporting that community."

Last week, the busy mom-to-be was spotted out and about in London wearing a name tag with "Beatrice" on it for the Big Change charitable trust. The princess and a group of friends, including Richard Branson's children Holly and Sam, started the organization in 2012 to "find and back pioneers who lead early-stage projects that support young people." Beatrice remains a trustee of the organization.

Princess Beatrice and Edo announced in May 2021 that they were expecting their first child together. The new baby will be the Queen's 12th great-grandchild and the second grandchild for Prince Andrew and Sarah Ferguson, Duchess of York.

Princess Beatrice is also a stepmother to Edo's young son from a previous relationship.

"Edo is easily one of the best dads, he is so involved, and Beatrice is already showing that she's a fantastic step-mummy," a source previously told PEOPLE. 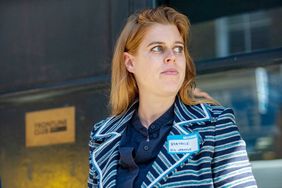