You can find the premiere issue of PEOPLE Royals at your local newsstand on Friday, March 5 or subscribe at peopleroyals.com/launch.

In the inaugural issue, Kate Middleton defines herself as a "millennial Queen-in-the-making," Sarah Ferguson, Duchess of York gets personal over a cup of tea and singer-songwriter and actress Rita Wilson shares her memorable encounter with Princess Diana 25 years ago. Plus, looking for your new favorite cocktail? Try the Queen's favorite drink.

Read ahead for a sneak peek!

Kate the Great: How the Future Queen Is Defining Herself

At the 10-year mark in her royal career, Princess Kate has firmly established her voice. If the current Queen, 94, has embodied the very English stiff upper lip throughout her long reign, the millennial Queen-in-the-making, 39, has chosen a modern path: feelings are to be validated, mental health is to be prioritized, and laughter is to be encouraged. And like parents around the world, she's doing this all while homeschooling 7-year-old George, 5-year-old Charlotte and 2-year-old Louis. There is no doubt that Kate faces pressures uniquely her own: She is the wife of one future King and raising another. To add to the pressures, there was also the resignation of her brother-in-law Prince Harry and sister-in-law Meghan Markle from royal duty. The move left Kate as the only senior royal woman of her generation. "Kate is now the only real possible provider of the glamour factor," says historian Sarah Gristwood, author of Elizabeth: The Queen and the Crown.

As she continues to straddle two very different types of leadership, she does so under the scrutiny of the world's eyes. "You can look through 10 years of pictures of Kate Middleton and there are no off moments," says Elizabeth Holmes, author of HRH: So Many Thoughts on Royal Style. No, she's not likely to speak out on issues royals have avoided for centuries, including politics and personal struggles. But in a turbulent world too often rocked by unrest, she can be counted on as a beacon of stability. "There is a tremendous power in being consistent and making people happy," says Holmes. "There aren't that many powerful people who can do that." For more, including Kate's 5 rules of parenting, check out PEOPLE Royals.

What Tea Time Means to Me by Sarah Ferguson

"Teatime has always been an important part of our family day, where we can take time to share news," the Duchess of York writes in an exclusive essay. "When my girls were younger, we would sit and chat about their day at school, any achievements or concerns they might have. We would have a magical feast of finger sandwiches, cocktail sausages, biscuits, scones with clotted cream and jam and bite-size cakes. Of course, afternoon tea food became more adult as the girls grew older, with smoked-salmon sandwiches and cucumber sandwiches replacing the Traffic Light ones, but the basic ethos was the same: a time of sharing." For more, including the Duchess of York's tips for brewing the perfect cup of tea, check out PEOPLE Royals.

That Time I Met…Princess Diana by Rita Wilson

Rita Wilson is a singer-songwriter, actress and producer whose new single, "I Wanna Kiss Bob Dylan" is out now. Her song "Everybody Cries" is featured in the film The Outpost.

"I was around 7 months pregnant with my youngest son at the premiere of Apollo 13 in London [in 1995]," Wilson shares in an exclusive interview. "We met the princess, and then we were all seated in a small screening room. [My husband] Tom [Hanks] was sitting next to her and got up to say a few words. As he walked back to his seat, Diana held the seat down for him, and it was just this sweet gesture that was very spontaneous and thoughtful and not something you would consider a princess doing. She was that kind of warm and accessible.

"I was sitting next to her later that evening at dinner, and because I was pregnant, she said, 'Do you need anything? Can I get you a cushion? Are you comfortable? How are you feeling? Are you able to eat?' She asked all the questions that you would ask someone who was expecting a child and had been through a really long night and dinner. She understood what that was like and how you'd really rather be in bed no matter who is sitting next to you. And by the way, I wouldn't have rather been in bed!" For more, including the "shocking" moment that made Wilson's "heart ache" for Diana, check out PEOPLE Royals. 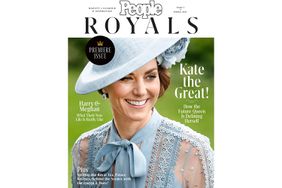