Olivia Colman is handing the "reigns" over to Imelda Staunton — and she has some advice for The Crown's next (and final!) Queen Elizabeth actress.

"If she calls me, I'll be so excited. Then what would you say to Imelda Staunton?" Colman said in a press conference. "Good luck…the wig's itchy."

Colman — who won an Oscar for her portrayal of another royal, Queen Anne, in The Favourite — also suggested Staunton practice her regal walk, before admitting that the Harry Potter and Downton Abbey actress has "already got a much better walk than me."

Lesley Manville will take over the role of Princess Margaret from Helena Bonham Carter, who said she'd love to pass on one of their character's key items.

"It's like handing a baton. It's like a relay race, but it never comes back," Bonham Carter said. "I want to hand her my cigarette holder and say, 'Good luck with this.' That would be nice, wouldn't it?"

The star added that she would love to have tea with Manville and Vanessa Kirby, who portrayed the Queen's younger sister in seasons 1 and 2. Bonham Carter recalled that Kirby was "so generous and told me all sorts of things" about Margaret, but she'll "wait for Lesley's call."

Keeping with their system of replacing actors as their characters age through the decades, The Crown has also cast Jonathan Pryce as their Prince Philip for seasons 5 and 6 (following in the steps of Matt Smith and Tobias Menzies), while Australian actress Elizabeth Debicki will take over the role of Princess Diana from Emma Corrin. 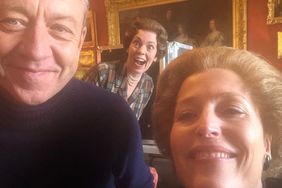