Now You Can Buy the Romantic Painting Prince Harry Secretly Gave Meghan Markle — for Under $300!

Prince Harry clearly has romance down to a fine art — and now you can, too.

A miniature version of the artwork Everybody Needs Somebody To Love, which Harry brought “for a special person” in October 2016 — just weeks before he went public with Meghan Markle — is now available to buy for $262.

Created by rising British artist Van Donna (a pseudonym of Van Gogh and Madonna), the artwork is ¼ size of the original and feature a Banksy-style stenciled image of a boy and girl walking hand-in-hand into the distance. Harry’s original also includes a second canvas carrying the words “Everybody Needs Somebody To Love.”

While it’s not known if the romantic piece was definitely a gift for his future wife, the prince asked if the acrylic, stencil and spray piece could be split in half, so that the separate panels could be shared between two different people.

“It’s wonderful that the piece played a small role in their romance,” a London art collector tells PEOPLE. “It’s part of the fairy tale.”

“He went to the gallery and had a good look at the art then settled on the Van Donna,” adds an onlooker. “It was literally before anyone had heard about Meghan — just days before it was announced that they were an item.”

Should you want to go one better and add an exact replica of Prince Harry’s painting to your own collection, then that’s also possible — although only 50 have ever been made. Priced at a little more than $1,000, it’s four times as expensive as the mini-version, yet this is actually something of a bargain for Van Donna’s work, one of which sold for $5,000 at a Christie’s exhibition in 2016.

“Each image is four times the size of the mini one,” adds the art expert. “The celebration edition was created after the royal wedding and is identical to the one Harry brought.”

While the gallery would not comment on Harry’s visit or the recent miniature version — of which only 199 have been made — the original is considered to be the most important produced by Van Donna and hangs in both the Freud museum in England and the Faberge Museum in St. Petersburg, Russia.

“Harry and his brother are following in their mother’s footsteps and continuing to put good into the world,” says the art expert, who adds that Harry “is a regular visitor” to the quaint area of London, which is just a short stroll from Nottingham Cottage, the 1,300-sq. ft., two-bedroom starter home he shares with Markle in the compound of Kensington Palace.

“He’s a wonderful person and very, very genuine and down to earth,” says the art expert. “He dresses down and he plays down and he is down.” 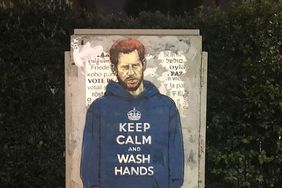