Princess Charlotte is sugar and spice – and spirited, her mom Princess Kate said on Friday.

“Oh, she is very cute but she has got quite a feisty side!” Kate said at the celebrations in London to mark Queen Elizabeth‘s official 90th birthday. And she joked that she hopes nearly 3-year-old Prince George will keep his 1-year-old sister in line!

“The Duchess was saying how happy she was to be here and how lovely the service was,” attendee Glynis Double told reporters. “As a mum myself, I asked her about her children and said what a pretty little thing we all thought Princess Charlotte was.

“She said, ‘Oh, she is very cute but she has got quite a feisty side!’ I then asked her about George and she said he was a really lovely little boy. She said she hopes that George will keep Charlotte in order!”

Double, whose husband Paul is the City’s Remembrancer and helped organize the event, added, “She was just lovely – and very, very beautiful. She kept on asking if we had enough to eat. I told her we hadn’t stopped since we arrived!”

The reception welcomed 1,800 people who had attended the service, including Kate’s husband Prince William and Prince Harry, Prince Andrew and his daughters, Princesses Beatrice and Eugenie and others.

Some of the more junior members of the family such as Zara Tindall and Peter Phillips, niece Lady Sarah Chatto and Lord Freddie Windsor and his wife Sophie headed across the city to the party in a hired bus, in contrast to the chauffeured cars employed by senior royals and city bigwigs.

At the party, Jeffrey Mountevans, the Lord Mayor of London gave a speech in which he said he was the 54th Lord Mayor the Queen had met and praised her for her remarkable sense of duty.

The carriages on the new Elizabeth underground train line could be filled “many millions of times over, with lives the Queen has touched . . . [people] who cherish our Queen,” he said.

“We owe an immense debt of gratitude to The Queen and The Duke of Edinburgh,” he said. “For unfailing service. For sincere and steadfast support.” 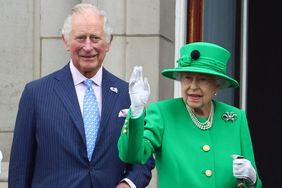