Mike Tindall Is Loving Life as a Family of 4 After Welcoming Baby Lena: 'It's Been Brilliant'

"So far, so good," Tindall tells PEOPLE. "I can't complain!"

Speaking as he arrived at a polo match where he was supporting Prince Harry‘s African charity Sentebale, Mike said that he and Queen Elizabeth‘s granddaughter Zara Tindall were finding a lot of the baby’s fresh, new clothing wasn’t needed in Britain’s unusually stifling heatwave.

“It’s a bit hot. You buy all these clothes and they never need them,” he says. “We just use nappies, but I’m not going to complain about hot weather in England.”

It was 91 degrees Fahrenheit at the Royal County of Berkshire Polo Club, where Harry was playing in the Sentebale Polo Cup. Harry, 33, was cheered on by wife Meghan Markle, 36.

Lena was born on June 18. The couple, who are also parents to daughter Mia, 4, had previously lost another child after Zara suffered a miscarriage.

“Zara wanted to come but it was [unable],” Mike shares. “She’s doing really well — it’s been brilliant so far.”

Mike Tindall Corrects Fan on How to Pronounce His New Daughter’s Name (It’s Not What You Think!)

Less than two weeks after Zara, 37, gave birth to Lena, she stepped out on Saturday to support her husband at a celebrity golf tournament.

Sporting a casual white blouse and jeans paired with a baseball cap, Zara headed out to the Celebrity Cup at the Newport Celtic Manor Resort golf course in South Wales with daughter Mia. Wearing a black and white striped dress, Mia sweetly sat in her mother’s lap.

Mia was also spotted holding hands with her father, who competed in the annual event after clinching a victory with Team England last year.

“The saving grace for us has been Mia, our daughter who is now 3,” Mike told The Sunday Times in May 2017 following the miscarriage. “However down we feel, she will come running up in our faces. When I was playing I hardly saw her; now we can see her grow up. I can take her swimming and I can take her to Ninja Tots. You’ll never be able to see her there because she disappears in a puff of smoke.” 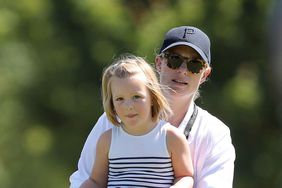 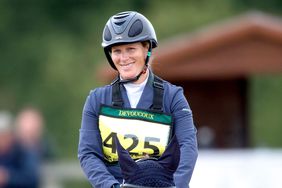 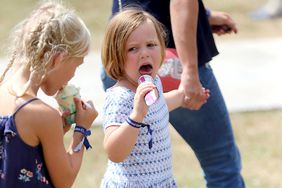