“Well … Surprise!” the First Lady told the military families as a blushing Prince Harry joined them in the East Room. The guests, who had been eating cookies, cakes and smoked salmon, broke into applause.

“He’s only got a limited amount of time with us but when he heard about the tea party and all of you, he wanted to be part of it to personally thank you for your service,” Obama said.

She also mentioned his recent tour in Afghanistan and told the crowd he was a captain in the Army Air Corps of the British Army, adding that he “spends much of his time supporting our wounded, warriors and families of our fallen.”

Earlier, Harry, 28, was introduced to a small number of children doing a craft project. He knelt down with some youngsters and playfully stuck out his bottom lip as he teased a girl.

This was the second stop on his first day of his U.S. tour. At a presentation for one of the charities he backs – landmine clearance group The Halo Trust – he was welcomed by a slew of excited Senate workers. 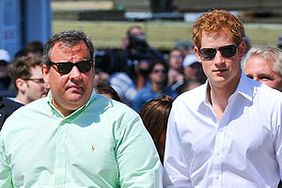 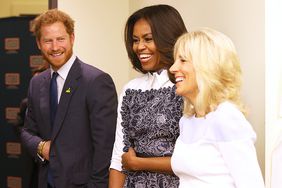