Meghan Markle is encouraging young women to use their voices in a time when they "have never been more urgently needed."

The Duchess of Sussex's keynote speech closed out "The Time Is Now" Women in Leadership Plenary at the virtual 2020 Girl Up Leadership Summit on Tuesday. She used her video recorded message, where she appeared in a blue top with her hair long and straight, to recognize the changes young women are already making in the world — and urging them to continue pushing further.

"It’s such a joy to speak to you today. To young women around the world who aren’t just poised to change the world; but have already begun changing the world," Meghan said.

"I want to share something with you," she continued. "It's that those in the halls and corridors and places of power — from lawmakers and world leaders to executives — all of those people, they depend on you more than you will ever depend on them. And here’s the thing: they know this."

"They know that all of you, at a younger age than any modern comparison, are setting the tone for an equitable humanity. Not figuratively, literally," she continued. "This is a humanity that desperately needs you. To push it, to push us, forcefully in a more inclusive, more just, and more empathetic direction. To not only frame the debate, but be in charge of the debate—on racial justice, gender, climate change, mental health and well-being, on civic engagement, on public service, on so much more. That's the work you’re already out there doing."

Meghan spoke about how Girl Up members are organizing protests, creating films on social causes, creating coalitions against gun violences and more.

"I know you have already done so much and made so many people’s lives better. The moment we are living through right now asks all of us to do more. It’s a moment where your voices, and your action, have never been more urgently needed. And we can take inspiration from women like Prime Minister Jacinda Ardern, who brought New Zealand together to swiftly and boldly tackle COVID-19, or Maya Moore, the WNBA star who has sat out from professional basketball since 2019 to free a man who served 20 years in prison for a crime he did not commit. And those are just two examples, as you well know there are so many others.

Meghan even opened up about her own struggles with putting her ideas and beliefs into action.

"Look, sometimes it’s not obvious what to do," she said. "Often, it’s fear that paralyzes us and stops us from being brave and being bold. But don’t underestimate that you have some of the answers. Don't underestimate your ability to push through the fear. You have, rooted in your convictions, the ability to craft a world that you know is just and kind. Your gut will tell you what's right and what's wrong; what's fair and unfair. The hardest part — and it was the hardest part for me — is to chase your convictions with action."

The mom of one also encouraged listeners to be patient in seeing the change come to fruition.

"If you look at the breadth of the issues we’re facing right now, it’s easy to get overwhelmed, I understand," she said. "So be where you are in the moment. The growth and change you’re pursuing might not feel like anything day-to-day, but when you look back, I promise you’ll see it all adds up."

"We make better communities and a better world for ourselves step-by-step," Meghan concluded. "And the pace of those steps is getting quicker. It's in looking at the aggregate, looking at the big picture, that you can see how far we've progressed."

As she concluded her speech, she said that her husband Prince Harry and son Archie will also be behind them.

"I am extraordinarily proud of what you’ve already accomplished. Please, continue to honor the conviction and compassion that’s awoken within you," she said. "I will be cheering you on, so will my husband, so will Archie, as you continue marching, advocating, and leading the way forward."

Girl Up is a leadership initiative that has worked with 65,000 girls through 3,500 clubs in nearly 120 countries and all 50 United States, working to inspire a generation of young women to be "a force for gender equality and social change," according to their website.

While Meghan, 38, and Prince Harry, 35, have been keeping in touch with charities via video calls amid the coronavirus pandemic, the leadership summit marks the first speaking engagement for Meghan since the couple stepped down from their senior royal roles in March that has been announced ahead of the event. 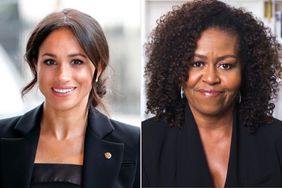