Hats off to the Duke and Duchess of Sussex!

Hats off to the Duke and Duchess of Sussex!

The couple took a carriage ride onto the course after having lunch with the Queen, 92, and joined her for the opening day of the iconic horse racing event. Meghan and Harry joined Prince Edward and Sophie, the Countess of Wessex in the carriage.

As their carriage entered the parade ring behind the main grandstand, racegoers were able to get a closer look at Meghan, 36, who wore an elegant white ensemble by Givenchy (her wedding dress designer!) with a matching white hat with black detailing by Philip Treacy.

Harry, 33, looked dapper in his traditional tailcoat and top hat. He was seen in the same formal suit for the wedding of his cousin Celia McCorquodale on Saturday.

Meghan held onto Harry’s arm as they made their way across the pristine lawn.

Prince Charles and Camilla, Duchess of Cornwall then joined the couple for an animated chat. Charles laughed heartily with his new daughter-in-law, before they joined the Queen in the royal box just in time to watch the first race.

Meghan and Harry capped their first appearance together at Royal Ascot by handing out the trophy for the St. James’s Palace Stakes to the winner — one of Britain’s most popular jockeys, Frankie Dettori.

Several members of the royal family gathered in the Parade Ring to watch the last race, which featured one of the Queen’s horses, Fabricate. But the horse failed to make any of top positions in the Wolferton Stakes.

It’s believed to be the first time that Meghan has been to the famous races, and it comes a day after her father appeared on British TV talking about his regret at not being at the royal wedding and his hopes for his daughter starting a family.

The Queen, who is passionate about horses, brings members of her family with her on each of the five days of the iconic horse race event. 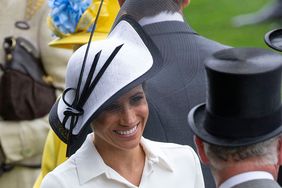 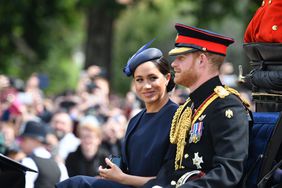