Meghan Markle is bringing an animated series to Netflix — with the help of friend David Furnish.

Meghan and Prince Harry's Archewell Productions announced Wednesday that it is developing a family series called Pearl (working title) that centers on a 12-year-old girl's "heroic adventure as she learns to step into her power and finds inspiration from influential women throughout history," Netflix said in a new press release.

The Duchess of Sussex will serve as the series' executive producer alongside Furnish, a Canadian filmmaker who married Elton John in 2014.

Meghan and Prince Harry's have a years-long relationship with John and Furnish, dating back to the music icon's friendship with Harry's mother, Princess Diana.

John and Princess Diana met at Prince Andrew's 21st birthday party in 1981, the singer recalled in his 2019 autobiography Me.

"She was blessed with an incredible social ease, an ability to make people feel totally comfortable in her company," he wrote. "That night in 1981, she arrived in the ballroom and we immediately clicked. We ended up pretending to dance the Charleston while hooting at the disco's feebleness."

John said that Diana was "fabulous company, the best dinner party guest, incredibly indiscreet, a real gossip: you could ask her anything and she'd tell you."

The friends had a falling out about a year before her death, when Princess Diana pulled out of contributing to a book for charity that John had organized.

"It was only really when Gianni Versace was murdered that we both got on the phone to each other and said, 'This is so stupid. We haven't talked,' you know," John said on CNN in 2002. "It's one of those things that friends sometimes do. You know, they're too proud to pick up the phone."

Six weeks after Versace's funeral, which John and Diana attended together, John and Furnish were in Nice and awoke to a fax from a friend offering condolences. They turned on the TV to find out that Diana had died in a car crash in Paris.

John famously performed "Candle in the Wind" at Princess Diana's funeral at Westminster Abbey, changing some of the lyrics to honor her.

"There was a sense in which it was the biggest gig of my life — for four minutes, I was literally going to be the centre of the world's attention — but equally, it wasn't an Elton John moment, it wasn't about me at all," John later said.

The singer maintained a relationship with Diana's two sons. In 2007, 10 years after the royal's tragic death, Prince William and Prince Harry joined John on stage at Wembley Stadium in London for a tribute concert for Diana, where he performed "Your Song."

John and Furnish were also guests at Prince William's 2011 wedding to Kate Middleton, and the musician attended and performed at the 2018 wedding reception of Prince Harry and Meghan.

Prince Harry and Meghan continued their friendship with the couple, from Harry working with John and Furnish at the launch of the Menstar Coalition to promote HIV testing and treatment to catching up at the 2019 premiere of The Lion King, when John greeted them with a huge smile and pulled Meghan in close to whisper something in her ear.

Shortly after the Duke and Duchess of Sussex welcomed their son Archie in 2019, the couple took a vacation to Nice in the south of France, with headlines focused on their use of a private jet to make the journey — a seeming contradiction to their stance on protecting the environment.

John responded to the criticism via Twitter, revealing that Meghan and Harry stayed at his home in Nice and that he provided the plane — which was made carbon neutral. (This typically involves calculating how much your flight generates in greenhouse gas emissions and financially contributing to a project that aims to reduce emissions by that same amount.)

"I am deeply distressed by today's distorted and malicious account in the press surrounding the Duke and Duchess of Sussex's private stay at my home in Nice last week," he wrote. "Prince Harry's Mother, Diana Princess Of Wales was one of my dearest friends. I feel a profound sense of obligation to protect Harry and his family from the unnecessary press intrusion that contributed to Diana's untimely death."

John continued, "After a hectic year continuing their hard work and dedication to charity, David and I wanted the young family to have a private holiday inside the safety and tranquility of our home. To maintain a high level of much-needed protection, we provided them with a private jet flight."

"To support Prince Harry's commitment to the environment, we ensured their flight was carbon neutral, by making the appropriate contribution to Carbon Footprint™," he said. "I highly respect and applaud both Harry and Meghan's commitment to charity and I'm calling on the press to cease these relentless and untrue assassinations on their character that are spuriously crafted on an almost daily basis."

John also addressed the Duke and Duchess of Sussex's decision to take legal action against the British tabloid media.

"They were very upset that their phones had been hacked," he told NPR. "I said, 'Listen, you take the appropriate action you want to take. You have to know that when you take appropriate action like this, there are going to be consequences and people are not going to like it. But if you feel like you have an injustice….'"

"I've always lived my life fighting injustice with the press," he continued. "I like the press, there's a need for the press, but sometimes they step out of their bounds. And hacking phones is not acceptable. If you phone is hacked, you've got to take action because the press cannot do that. So I have to say, 'Bravo.' "

In 2020, John joined other celebrities in reflecting on the difficult year for Meghan and Harry's holiday podcast episode through Archewell Audio. 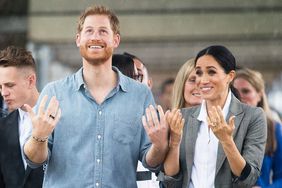 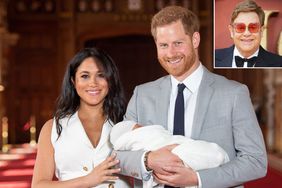