Prince Harry conjured up memories of his grandmother in Fiji

Prince Harry conjured up memories of his grandmother, Queen Elizabeth, as he and Meghan Markle enjoyed a glamorous first evening in Fiji.

The royal parents-to-be, who arrived to the South Pacific country Tuesday morning local time, received a rapturous welcome from streets lined with well wishers and around 15,000 in Albert Park in the capital. They then appeared on the balcony of the hotel they are staying in, the Grand Pacific Hotel – just as the Queen had done in 1953 alongside her husband Prince Philip.

The Queen has stayed at the hotel five times – and Harry’s father, Prince Charles, has also been a guest on several occasions.

At a glittering gala in the evening, Harry, 34, said he and Meghan, 37, were “overwhelmed by the warm Fijian welcome we received from the people of these beautiful islands this afternoon in Albert Park, and all the way from the airport! It really is a privilege to be here.”

“This visit is particularly nostalgic for us as a young married couple – my grandparents stayed in this very hotel, the Grand Pacific, a number of times over the years.”

The Duke of Sussex added, “As you know, Fiji has a long tradition of welcoming royal visitors over the years and our two countries have enjoyed a close relationship and friendship. We share Commonwealth values and common goals – a love of rugby and a sense of humor! Our ties run deep.”

“Your soldiers fought with the British Armed Forces during the First and Second World Wars and continue to serve alongside our soldiers to this day, with more than 1,250 Fijians currently serving,” he continued. “I must emphasize my respect, admiration and camaraderie with the Fijian soldiers that I served with in Afghanistan. We trained together, we fought together, and most importantly, we laughed together.”

While Harry went full black tie, completing his outfit by wearing a number of medal on his suit jacket, Meghan changed into the light blue Ginkgo cape dress by Safiyaa. She completed with look with statement earrings.

Earlier in the day, the newlyweds met with Fijian President Jioji Konrote and headed to an official welcome ceremony in Albert Park. The ceremony, known as the Veirqaraqaravi Vakavanua, embodies Fijian cultural identity and heritage. It mirrored that of the one attended by Queen Elizabeth and Prince Philip.

Fiji is the latest stop on the Duke and Duchess of Sussex’s whirlwind 16-day tour which has taken them through Australia and will take them next to Tonga and then, after returning to Sydney for the end of the paralympic-style Invictus Games, on to New Zealand.

Harry, who unveiled the latest Queen’s Commonwealth Canopy in the forest of Fraser Island on Monday, added, “We look to Fiji to provide leadership on environmental issues which affect all of us, and that have been affecting you as an island nation for many, many years. Fiji is a proud and vibrant culture whose people are so gentle but proud, honorable and resourceful.” 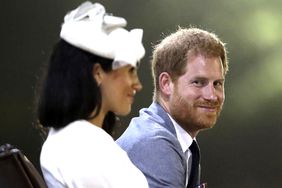 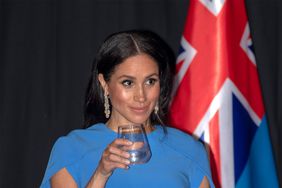