Since announcing that they are expecting their first child this spring, Meghan Markle and Prince Harry have dropped quite a few hints about Baby Sussex!

PRINCE HARRY WILL BE THE "BEST DAD"

Before the royal couple handed out the prizes at the Endeavour Fund Awards in February, they met with the inspiring nominees as well as participants and key supporters at a pre-ceremony reception. Meghan was heard telling one attendee of Harry, "He's going to be the best dad."

As they moved around the party, Harry was also heard telling one invitee, "There's a heavy baby in there!"

During the couple's visit to the town of Birkenhead on Jan. 14, Meghan Markle told the crowd when she's due to give birth to their first child.

"We asked her how her pregnancy was going and she said she was six months and she tapped her tummy," well-wisher Carla Gandy from nearby Wallasey, who was there with her 4-year-old daughter Sofia, tells PEOPLE.

The Duchess of Sussex told others gathered in Hamilton Square that she's due in late April.

THEY'RE KEEPING THE SEX A SURPRISE...

Kitty Dudley, 9, was among the well-wishers who spoke to Meghan during the couple's visit to Birkenhead.

"Meghan came up to me and asked me how old I was and where I went to school," she told reporters. "I could see her bump and I asked if she was having a boy or a girl and she said, 'We don’t know whether it's a boy or girl – we are keeping it as a surprise.' "

Prince Harry revealed during a cycling event at the Sydney Invictus Games in October that he wants his first child to be a girl.

A video of the sweet moment shows a fan calling out to Harry that she hopes the baby "is a girl," and Harry immediately responds, "So do I!" as he continued to walk along the bike path.

Fan Jean Elliott told Meghan she thought she was having a girl.

During their visit Birkenhead, 7-year-old girl named Megan Dudley offered a name suggestion for the baby.

Dudley told reporters, "I asked her whether she would call her baby Amy if she has a girl, and she said, 'That’s a really pretty name, I like it. We'll have to think about it.' "

During the royal couple’s royal tour in October, the pair hopped on one of Melbourne, Australia's iconic trams for a short ride to South Melbourne Beach with student sustainability leaders. Twelve-year-old Charlie Wolf took the opportunity to grill Meghan and Harry on a name for the royal baby.

Meghan gave a quick update on her pregnancy during a visit to Brinsworth House, a residential nursing and care home for British entertainers run by the Royal Variety Charity, in December. Speaking with retired West End theatre actress Josephine Gordon, 87, Meghan said she was doing "very good." She then paused, put her hands on her baby bump and added that she was feeling "very pregnant today."

Shortly after the baby news was announced, Harry referenced the newest addition while speaking at a reception in Sydney, Australia.

"We also genuinely couldn't think of a better place to announce the, er, upcoming baby," Harry said, looking over to Meghan. Appearing slightly nervous, Harry added, "whether it's a boy or a girl."

BABY SUSSEX MADE ANOTHER SPEECH

Harry also couldn't help but mention the big news during his speech at the Invictus Games Opening Ceremony.

"First of all, thank you for the welcome you have given Meghan and I over the last few days," he shared with the crowd gathered at the Sydney Opera House. "I have been so proud to be able to introduce my wife to you, and we have been so happy to be able to celebrate the personal joy of our newest addition with you all."

THE BABY IS A FEMINIST IN THE MAKING

Ahead of the International Women's Day panel, chair Anne McElvoy introduced Meghan as "a royal not afraid to embrace full-on feminism" and asked how her bump was treating her.

Meghan candidly replied: "Very well! It's funny, I've actually been joking in the past few weeks…I had seen this documentary on Netflix about feminism and one of the things they said during pregnancy is, 'I feel the embryonic kicking of feminism.' "

Prince Harry headed to St. Vincent’s Catholic Primary School to mark the first day of spring, but some kids wondered where his wife was. He told them that Meghan was going to have a baby, even miming a pregnancy belly.

During a special reception at Buckingham Palace, guests couldn't help but ask the Duchess of Sussex how she was doing in her third trimester.

"I look different than when you saw me last!” Meghan told Alun Cairns, Secretary of State for Wales.

"How are you doing?” Cairns replied. “I’m sure everyone is asking."

Will Meghan Markle and Prince Harry's Baby Share a Birthday with a Royal Cousin? 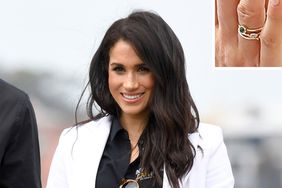 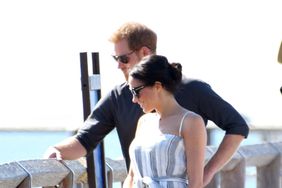 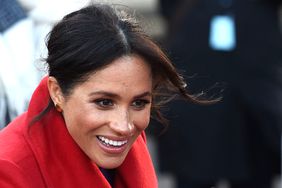