Meghan Markle and Prince Harry are adding podcast hosts to their résumés!

On Tuesday, the couple announced a "multi-year partnership" between Spotify and their newly formed production company Archewell Audio — with a two-minute audio clip of them debuting their podcast skills.

"He has a podcast voice!" Meghan said at the end of the message after Harry gave an introduction.

Meghan encouraged her husband to kick off the clip. After Prince Harry says, "Should we start? Ladies first," Meghan told him to take the lead because she thought Archewell Audio "sounds really nice with your accent."

They introduced themselves simply as "Harry" and "Meghan."

The Duke and Duchess of Sussex are set to host and produce original podcasts "all with the goal to build community through shared experience, narratives and values," according to a press release.

"What we love about podcasting is that it reminds all of us to take a moment and to really listen, to connect to one another without distraction," Meghan, 39, and Prince Harry, 36, said in a joint statement. "With the challenges of 2020, there has never been a more important time to do so, because when we hear each other, and hear each other's stories, we are reminded of how interconnected we all are."

Listeners will get their first glimpse at the production company with a holiday special out later this month hosted by Meghan and Prince Harry themselves.

"So that's what we're up to, and first up..." Meghan said, allowing Harry to finish with, "a holiday special." They then started to sing a little tune together.

"We're talking to some amazing people," Meghan added. "They're going to share their memories that really shape this past year, which has been, as we know, a difficult one for everyone."

Harry continued, "So many people have been through so much pain this year, experiencing loss, a huge amount of uncertainty — but it feels worth acknowledging that 2020 has connected us in ways we have never imagined through endless acts of compassion and kindness."

Prince Harry encouraged listeners to follow their page to get the newest episodes: "Here's what you need to do: tap follow right now. Go ahead, go on — tap follow — and that way you won't miss out."

Meghan added, "We're so excited, so follow and listen for free only on Spotify. We'll meet you back here soon."

Prince Harry and Meghan made their joint podcast debut earlier this year when they were guests on the Teenager Therapy podcast — hosted by five seniors at an Anaheim, California high school — to mark World Mental Health Day.

And in September, the couple announced a multi-year deal with Netflix. Their unnamed production company is set to make documentaries, docu-series, feature films, scripted shows and children's programming exclusively for the streaming giant.

Meghan and Prince Harry moved to Los Angeles with 1-year-old son Archie in March after stepping down from their senior royal roles. Over the summer, they bought a home in Santa Barbara, about 95 miles north of L.A. 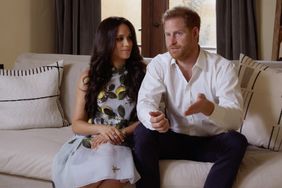