Royal fans won’t have to wait much longer to see Meghan Markle and Prince Harry again – they just announced their first engagement of 2019!

The couple, who are expecting their first child in the spring, are kicking off the new year with a visit to the town of Birkenhead, Merseyside, on Monday, Jan. 14.

First, the Duke and Duchess of Sussex will head to Hamilton Square to unveil a plaque for a new sculpture marking the 100th anniversary of celebrated poet and soldier Wilfred Owen’s death. Meghan, 37, and Harry, 34, will also meet local veterans and members of the Birkenhead Institute Old Boys, which Owen belonged to, before greeting members of the public.

The couple will then head to Tomorrow’s Women Wirral, an organization established in 2011 to support women upon their release from prison. It has expanded to offer an extensive range of training courses for more than 6,000 local women, including support groups around mental health issues, domestic abuse and addiction. Meghan and Harry will hear from the women about their experiences and visit various areas of the charity, including a facility aimed at providing a safe place for young people.

The visit to Birkenhead will mark their first outing since joining Prince William, Kate Middleton, Queen Elizabeth and other members of the royal family for their traditional church visit on Christmas. Meghan opted for a deep navy dress and a Victoria Beckham coat with a matching fascinator for the annual event, where she proved that a growing baby bump didn’t stop her from dipping for a perfect curtsy to the Queen.

The new year will be a big one for the royal parents-to-be. In addition to welcoming their first child, Meghan and Harry have also announced that they will leave Kensington Palace and move into Windsor Castle’s Frogmore Cottage. The Duchess of Sussex is also expected to announce her patronages, the causes and charities she will help in her royal life, in the near future. 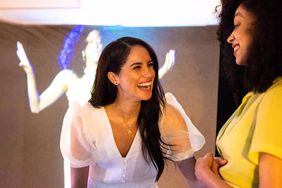