Meghan Markle and Prince Harry Bring Archie to 'Low-Key' Pub Lunch: He Was as 'Good as Gold'

Meghan Markle and Prince Harry stopped by a local pub for a “low-key” lunch with 3-month-old son, Archie, The Sun reports.

The family of three went to The Rose & Crown in Winkfield village, Berkshire, on Sunday. The Rose & Crown, which calls itself a “British pub with all the trimmings,” specializes in traditional British food with a continental twist and is just five miles from the couple’s Windsor cottage home. (They serve a special Sunday roast for just $12!)

“They were on a table with, I presume, a private secretary. Meghan was cradling Archie most of the time,” a businessman, 53, who was at the pub with his girlfriend, said. “The little lad was as good as gold, I didn’t hear him cry once while he was there.”

Harry had a couple pints of beer with his meal while Meghan drank water.

“No other customers recognized them. The staff clearly knew who they were but kept the service low-key,” the onlooker continued. “They did indicate to me they had been there before. They just chatted away like any normal couple and were laughing a lot.”

Meghan and Harry recently traveled to Nice in the south of France with their son for a relaxing family vacation at Elton John’s villa overlooking the Mediterranean.

They royal couple’s son seems to have inherited his father’s most recognizable feature!

“He’s a happy baby,” a source tells PEOPLE of Archie, born May 6. “He has lovely, puffy little legs and tufts of reddish hair. He’s really adorable.”

Their arrival in the French Riviera came just two days after they arrived back from Ibiza, where they took a break around August 4, when Meghan celebrated her 38th birthday.

They are also expected to use part of their summer holiday to head to Balmoral Castle to spend time with Queen Elizabeth and other members of the royal family. Next month, they will embark on a long-haul flight to Africa for Archie’s first official overseas visit. 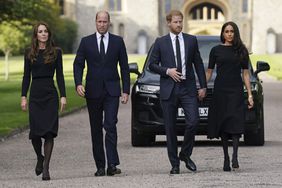