Meghan played a hands-on role in helping Patsy Wardally find an interview-ready ensemble during her visit to SmartWorks, a charity helping unemployed women

After announcing the causes she plans to support during her royal life, Meghan Markle wasted no time in getting to work.

The Duchess of Sussex, who is expecting her first child, visited Smart Works, a charity that helps vulnerable and longterm unemployed women regain the skills and confidence to get into work. It is one of the four patronages announced Thursday that Meghan will champion throughout her public life.

Meghan played a hands-on role in helping Patsy Wardally find an interview-ready outfit. Meghan helped style Wardally for the important interview as she was being fitted in a patterned pink dress with a belted waist.

“That’s such a pretty color,” the royal mom-to-be said.

She also picked out accessories, and they completed the outfit with a camel-colored coat – a piece that could easily belong in Meghan’s own closet!

Wardally, 55, from east London, said: “It was so exhilarating to meet the Duchess. She picked out a Hobbs cape, a pair of earrings, a bracelet and a handbag for me.”

“She chose things that were fantastic and now I feel much more confident and more beautiful,” added Wardally, a mom of three who had trained as a plumber but had to stop working 16 years ago to look after her daughter with autism.

Meghan, 37, also sat down with some of the women to discuss why she was drawn to their organization.

“It’s a community that I’m so drawn to about it here. It’s not just donating your clothes and seeing where they land, but really being part of each other’s success stories as women. If that’s in the tools that you give or the interview prep that’s happening, every piece of it.

She added, “It’s not just hand-me-downs. It’s saying, ‘Okay, this is the blazer that I wore that helped me land that interview, and I want this to be the piece that helps this woman have that part of her story. So to know as a woman coming in, I would imagine, that you have so many other women believing in you in all the next phases is the piece that makes it so special.

The charity has helped over 11,000 women and has plans to dress 3,500 more this year. It also emerged during her visit that Meghan has been there several times — and even gave some women coaching before a job interview.

Meghan wore a maternity dress (her first on a public outing!) — the Eliza Dress by Hatch. The $218 black midi-length dress features a subtle ribbed crew neckline detail and is made of stretch cotton viscose knit. She topped it off with a swing coat in cotton-twill by Oscar De La Renta.

The other patronages that were announced on Thursday are the National Theatre, The Association of Commonwealth Universities and the animal welfare charity Mayhew. They are all national and grassroot organizations “that are part of the fabric of the U.K,” the palace said. 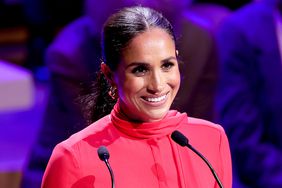 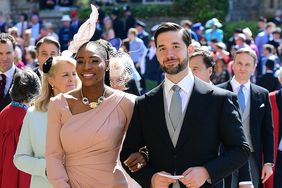