The royal women had their first-ever joint outing (without their husbands!) at the tennis tournament last year

Meghan Markle and Kate Middleton are having a royal moms’ day out!

The sisters-in-law attended at the Ladies’ Singles Final at Wimbledon on Saturday, recreating their first-ever joint outing (without their husbands!) from one year earlier.

Arriving ahead of Meghan, Kate was the first to arrive at the sporting event, wearing a green Dolce & Gabbana dress, which she had previously worn during a royal tour in Canada with husband Prince William in 2016.

Ahead of the match, the royal was also seen meeting with junior players from Russia, Latvia and France. As a patron of the All England Lawn Tennis and Croquet Club, Kate had to arrive early in order to carry out her official duties.

Another reason why the pair arrived separately is because they were arriving from separate homes! Although last year both royals were living in Kensington Palace, Meghan and her husband Prince Harry have recently moved to Frogmore Cottage, which is located about 25 miles from their former home.

Joining Kate, Meghan was all smiles as she arrived wearing a white button down shirt which she paired with a pleated white skirt with a blue design from Hugo Boss.

Joining the two royal mums for their fun day out was Kate’s sister Pippa Middleton, which marked the first time all three women made a public appearance together.

“The Duchess of Cambridge, @Wimbledon Patron, and The Duchess of Sussex attended the #Wimbledon 🎾 Ladies’ Singles Final today,” the post read. “Well done to Serena Williams and Simona Halep on a fantastic match, and congratulations Simona on your first Wimbledon title!”

Last year, Meghan and Kate made a highly anticipated appearance in Centre Court’s royal box for the same finals match, when Williams fell short to Angelique Kerber. The royals coordinated their outfits for the event — the Duchess of Sussex choosing a summery blue-and-white striped shirt from Ralph Lauren with wide-leg cream pants, while Princess Kate opted for a white-patterned dress.

How to Do Wimbledon Like Kate Middleton and Meghan Markle: The Ultimate Insiders’ Guide

Saturday’s outing will mark return trips to Wimbledon this summer for Kate and Meghan, both 37.

Kate surprised royal fans with an appearance at the tennis tournament on July 2 — but rather than take her normal seat in the royal box, she headed over to Court 14 to watch British player Harriet Dart play American Christina McHale.

The royal mom of three — who sported a white shirt dress with buttons down the front accessorized with an Alexander McQueen belt, chic sunglasses and her signature blowout — later headed to Centre Court where she then took her seat in the front row of the royal box to see Tatjana Maria play Angelique Kerber.

Meghan cheered on Williams two days later, sitting with in the stands with friends Lindsay Roth and Genevieve Hillis. The new mom to son Archie, born May 6, wore the “Brea” jacket by L’Agence with a pair of her favorite Outland Denim jeans (the “Harriet,” which is the same style she wore in Australia) and Finlay & Co.’s “Henrietta” sunglasses.

Both Meghan and Kate, who is also patron of the All England Lawn Tennis and Croquet Club, have been fixtures at Wimbledon for years. Meghan previously attended the tournament in 2016, around the same time she was set up on a blind date with future husband Prince Harry!

And Kate has said the tennis tournament is a “quintessential part of English summer.”

“I was really taken by Agassi and Sampras, Ivanisevic and Steffi Graf,” she said in 2017. “That for me was my first memories.”

The royal moms also stepped out together this week for a big family outing. They brought all four kids — including 1-year-old Prince Louis and 2-month Archie! — to cheer on Prince William and Prince Harry in a charity polo match.

An onlooker tells PEOPLE that Meghan mainly stayed under the shade of a tree with her son in her arms.

Meanwhile, Kate was busy chasing after Louis as Prince George, 5, and Princess Charlotte, 4, kicked a soccer ball and showed off some dance moves before heading to the car for a picnic.

It’s a busy weekend for both royal women. Kate is set to return to Wimbledon on Sunday with Prince William for the Gentlemen’s Singles Final, while Meghan and Prince Harry will hit the red carpet for the London premiere of The Lion King. 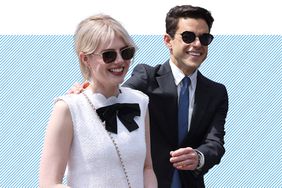 Wimbledon 2022: See all the Stars in the Stands 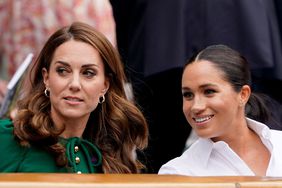