Plus, Kate also did a double curtsy for the Queen

Meghan Markle and Kate Middleton had plenty of chances to show off their curtsies on Monday!

The royal women and their husbands, Prince Harry and Prince William, were on hand to celebrate Commonwealth Day at a Westminster Abbey service on Monday. After arriving separately, Kate and Meghan exchanged a friendly kiss on the cheek as they greeted each other inside, while the brothers shook hands. They then chatted as Prince Charles and Camilla, Duchess of Cornwall, made their way in.

While Kate greeted her father-in-law with a double kiss on the cheeks, Meghan appeared to dip into a curtsy before giving him the same friendly hello.

A palace insider says, “There is no hard and fast rule [about curtsying]. There is such a lot of nonsense published about this. There is nothing written down about this, even for members of the royal family. People normally just do what they feel comfortable with.”

The insider adds: “Even when a member of the public doesn’t curtsy, the Queen doesn’t take offense.”

Kate, Meghan and Camilla all showed their respect for the Queen when she entered Westminster Abbey, dipping into a practically synchronized curtsy – however, she wasn’t looking in their direction.

Eagle-eyed royal fans noticed that all of the women bowed again after the 92-year-old monarch greeted a line of guests. Meghan and Camilla bowed, then Kate did the same after the Queen greeted her eldest son.

The couples then filed behind her for their procession to their seats.

Meghan made a quick change from the green Erdem coat she wore earlier in the day into a cream coat over a printed dress with a matching pillbox hat. Kate opted for her red Catherine Walker coat dress, which she wore in New Zealand in 2014. She topped it with a matching fascinator.

With 60 percent of the populations of the 53 nations under the age of 30, much of the service was targeted towars young people. Grammy-award winning group Clean Bandit performed along with the U.K.’s biggest-selling tenor, Alfie Boe. A reflection was given by Lewis Pugh, an endurance swimmer, ocean advocate and the U.N. Patron of the Oceans — representing a cause that has been championed by Charles and his sons, Harry and William.

This year marks the 70th anniversary of the modern Commonwealth, which encompasses almost 2.4 billion people, a third of the world’s population. The young nature of the Commonwealth populations has led to Harry being named as the Youth Ambassador for the organization by his grandmother last year. He and wife Meghan, 37, are making the Commonwealth a central part of their public life.

Earlier in the day, Harry and Meghan celebrated with a group of Canadians at Canada House in London, where the royal couple met with a group of kids who taught them how to make special maple candy. 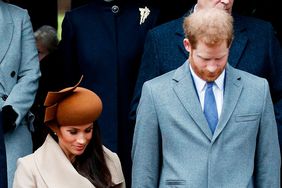