On Friday, the Duchess of Sussex adorned her fingers with a number of rings, including her three-stone sparkler

Meghan Markle stepped out without an important accessory on Monday — but all eyes were on the young greeters who helped her kick off Commonwealth Day celebrations.

The Duchess of Sussex, who is expecting her first child with Prince Harry, visited Canada House without her engagement ring. The royal mom-to-be, who previously revealed she is due in late April, still wore her wedding band, made of rare Welsh gold gifted to the couple by Queen Elizabeth, plus a simple gold ring on her left thumb during Monday’s outing.

As she and Harry left, they were met by a boy and girl, who honored the royal couple with a sweet bow and curtsy.

The Duchess of Sussex also accepted a bouquet of white flowers before bending down (so low that her coat touched the ground despite her high heels!) to chat with them.

Just three days ago, Meghan adorned her fingers with a number of rings while taking part in a panel for International Women’s Day, including her engagement ring – a gold stunner made up of three diamonds, with one large stone in the center flanked by two smaller stones on the sides.

The ring has plenty of sentimental connections for Harry: The two stones are from his late mother, Princess Diana’s personal collection, while the other stone is from Botswana, a country that is close to his heart.

For this morning’s outing, Meghan chose a bespoke coat and dress by Erdem. The knee-length green jacket with beaded floral appliqué hugged her baby bump – and has a special connection to her adopted hometown (Meghan filmed Suits in Toronto for several years before marrying Prince Harry). Fashion designer Erdem Moralioglu was born in Canada to a Turkish father and an English mother, and he split his time growing up between Montreal and England – making the brand a perfect choice to honor both countries.

The coat also has a fun connection to Meghan’s mom, Doria Ragland. According to Erdem, the black floral embellishments are known as the “Doria beaded rose embroidery.” 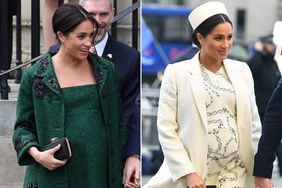 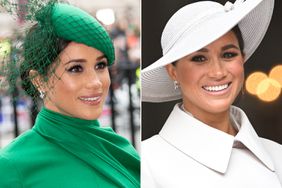 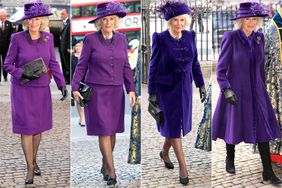 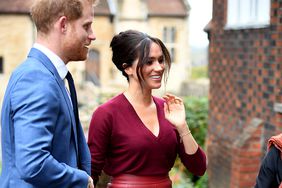 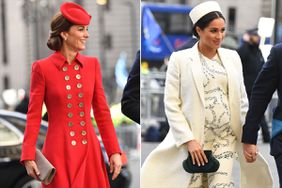