Meghan Markle is back on the Buckingham Palace balcony!

Meghan Markle is back on the Buckingham Palace balcony!

A month after her balcony debut at the annual Trooping the Colour in June, the Duchess of Sussex appeared on the historic balcony alongside husband Prince Harry, brother-in-law Prince William and sister-in-law Kate Middleton, as they joined Queen Elizabeth for a special celebration on Tuesday.

Meghan wore a bespoke dark navy Dior dress with a boatneck neckline for the big event. (She also rocked a variation of the boatneck style for her first balcony appearance!).

The newly-minted duchess had a prime spot on the balcony — right next to the Queen herself. Meghan and the Queen had their first solo outing together last month, where the former Suits star proved to be the perfect royal companion.

The royals were on hand to mark 100 years of the Royal Air Force. During the event, they observed a thunderous fly-over by 100 aircrafts, including jet fighters, World War II Lancaster bombers and the ceremonial Red Arrows. There was also a Feu de Joie, or mass rifle salute, to complete the military pageantry.

The royal family began the day at Westminster Abbey for a service to honor the world’s first independent air force, which was founded on April 1, 1918, and created a separation of the British Army and Royal Navy.

Following the service, they headed back to the palace, where the Queen, 92, and Charles, 69, stood on the forecourt to present a new Queen’s Colour to the Royal Air Force at a ceremony to mark its centenary. After a short speech, the royals went inside the palace and then emerged on the balcony for the celebratory flypast.

The event comes one day after the royal christening of 11-week-old Prince Louis at the Chapel Royal in St. James’s Palace. While the Queen didn’t attend the christening due to her heavy workload, she was in good spirits for the RAF celebrations. (The decision was mutually agreed upon by William and Kate several weeks ago.)

After the flypast, Meghan and Harry — the new Duke and Duchess of Sussex — took off for Dublin for their first official overseas visit since their May 19 wedding. 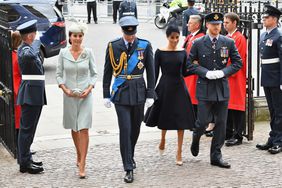 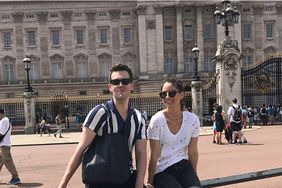 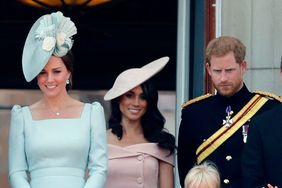 Why Meghan Markle Stood Behind Kate Middleton for Her Balcony Debut: 'There's a Pecking Order'