Meghan Markle and Prince Harry showed their support for military families when they dropped in on some of their neighbors for an unexpected cup of coffee.

During a surprise outing on Wednesday morning, the royal couple spent time with military families who have relatives deployed abroad. The Duke and Duchess of Sussex surprised the group at their regular weekly meet-up, which is held for families at the Broom Farm Community Centre in Windsor — near the royal couple’s Frogmore Cottage home.

“Look at all your little teeth,” Meghan says to a little girl in a video shared to the couple’s Instagram account. “Archie’s just got two teeth — two tiny ones right there.”

Amy Thompson, whose husband Brad is attached to the Welsh Guards, told Army & You magazine: “My daughter Aeris is the same age as Archie and we talked about weaning and the children beginning to crawl – she’s just a normal mum and it was like talking to a friend.”

Meanwhile, Army spouse Leigh Smith brought along her daughter Molly, 8, to meet the couple. “Meghan promised not to tell anyone that I was off school,” Molly said. “She asked me who my best friend was.”

Leigh told the magazine: “We had a party when Harry and Meghan got married and we’ve followed their story ever since. So it was an amazing experience for Molly to shake hands with them. It’s really special and a lovely boost for the whole community.”

Former Army captain Harry, 35, and Meghan, 38, live in Windsor and the town, on the edge of London, has a large barracks that is home to regiments from the Coldstream Guards and Welsh Guards. Many of the Coldstream Guards are serving on exercise in Kenya, Africa, while the Welsh Guards have a large section away in the Falkland Islands. Windsor also hosts some of the Household Cavalry — a regiment with which Harry served in the early years of his decade in the Army.

Harry sympathized with those he met over the separations that the families face.

“It’s unbelievably hard. I have so much respect and admiration for anyone who has to deal with that,” the prince said.

And the new dad also acknowledged how difficult it is for serving parents to be away.

“I can’t imagine what it’s like to miss so much as they change so quickly,” the prince added.

“The regiment are really appreciative of the support the families provide by picking up the burden when the service person is away. [The Duke and Duchess] are very down to earth, and they’ve had a snapshot of the entire community here by talking to lots of people from different backgrounds,” he said.

Tariq Baksh, from the Household Cavalry welfare team added, “They’re a modern family and completely empathized with people – our families realized that they’re no different.”

It was one of the first events of a week of remembrance for both serving members of the armed forces and veterans who have served. Those who lost their lives in war are being remembered this week in the U.K. with a series of poignant ceremonies.

Later on Thursday, Harry and Meghan headed to the Field of Remembrance at Westminster Abbey in London. They will be alongside Prince William, Kate Middleton and Queen Elizabeth at events over the weekend. 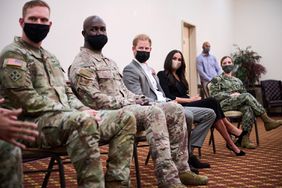 Prince Harry Is Dropping Hints About Baby No. 2 with Meghan Markle! 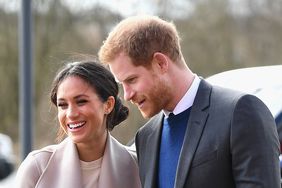