"If people are saying things about you that aren't true, what that does to your mental and emotional health is so damaging," Meghan said

Meghan Markle is opening up about the online abuse she endured when she married into the royal family.

The Duchess of Sussex recently appeared alongside Prince Harry on the Teenager Therapy podcast — hosted by five seniors at an Anaheim, California, high school — and discussed the toll that social media can take on mental health.

“Yes it’s a great way to connect, but it also ends up being a place where there's a lot of disconnection,” Meghan said. “I can speak personally too, I’m told that in 2019 I was the most trolled person in the entire world, male or female.”

During that year, Meghan was pregnant with son Archie and she recalled: “Now, 8 months of that I wasn’t even visible — I was on maternity leave or with a baby. But what was able to be manufactured and churned out, it’s almost unsurvivable.”

“I don’t care if you’re 15 or you’re 25, if people are saying things about you that aren’t true, what that does to your mental and emotional health is so damaging,” Meghan said.

Meghan and Harry appeared on the podcast for World Mental Health Day on Saturday, Oct. 10. She said part of what the pair hope to accomplish through their advocacy is to emphasize that “we all know what it feels like to have our feelings hurt.”

The conversation was recorded earlier this week with three of the five hosts — Gael, Kayla and Thomas — at a coronavirus-compliant shooting location (including masks) in Montecito, California, where the couple recently moved with 1-year-old Archie. Meghan and Harry led the crew in deep breaths a few times during the conversation to help calm the young hosts' nerves.

“Vulnerability is not a weakness, showing vulnerability in today’s world especially is a strength,” Harry, the Duke of Sussex, said. “The more we talk about it the more it becomes normal, and it is normal.”

During the discussion, Meghan also mentioned her headline-making comment that she was "not okay" when she was asked by ITV journalist Tom Bradby how she was doing just after welcoming Archie.

"I was tired," she said of the interview, which took place during the couple's tour of South Africa. "I was just about to give Archie a bath. I was exhausted."

“She was still breastfeeding at the time,” Harry added, as Megan explained that although most people weren’t aware of it, “between every official engagement I was running back to make sure our son was fed.” 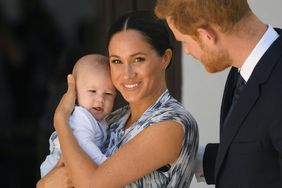 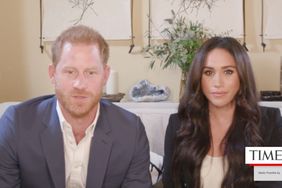