The mom of two and 8G founder talks about her in-laws' "loving and cozy" home, Woburn Abbey

The series finale of Downton Abbey is fast approaching, but for Dawn Russell it’s simply a way of life.

The American mom of two became “Lady James Russell” in 2005 when she married Lord James Russell, a member of one of England’s oldest noble families.

Jamie’s oldest brother, Andrew, is the current Duke of Bedford and resides in the historic Woburn Abbey, located an hour north of London. Although Dawn, Jamie and their two boys live primarily in London, Woburn (pronounced WO-bun) is the Russell family home and the site of Christmas celebrations, four-wheeling on the vast grounds (15,000 acres in total!) and playtime with cousins.

“I see Woburn as a home and not a museum,” Russell, 41, tells PEOPLE in this week’s issue. “It’s where my husband was born and raised. It’s where my in-laws have done an amazing job creating an environment that is very loving and cozy in a very grand setting.”

But the mom of 5-year-old Alexander and 2-year-old Leo is emphatic when asked if she believes in fairy tales.

“I love him more than any human being besides my two boys,” she says. “Is there a prince? Listen, I’m so lucky it’s indescribable. But I’m not so sure that a prince exists. If there were one, I would give him the title.”

Russell, who was diagnosed with stage III lymphatic cancer at age 25, is also the founder of 8G, a supplement tablet that launched last year and is available at Nordstrom.

For more on Lady Dawn and her extraordinary journey, pick up this week’s issue of PEOPLE, on newsstands Friday

“8G is everything I’ve learned about greens and health through my own personal journey,” she says.

Of course, that journey also includes getting her bearings at the vast Woburn Abbey. Describing Woburn as “a kid’s greatest playground,” Russell notes that her boys have grown close with much of the staff for the historic estate, which includes a safari park featuring more than 80 species.

“Yes, [Woburn] is impressive and imposing, and there are a lot of people who work here, but those people are like semi-family,” she says. “For my kids it’s all about going to see Bob the gamekeeper at the safari park. That’s the only Christmas card my son wanted to write last year!” 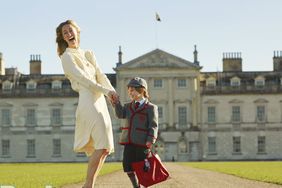 Better Than 'Downton' ! Take an Exclusive Tour of Woburn Abbey 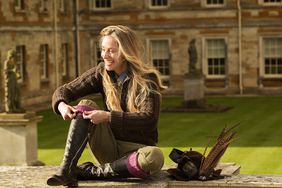 No Kissing the Butler! Lady Dawn Russell's Do's and Don'ts for Life as an American-Turned-Aristocrat