The 9-month-old daughter of Zara and Mike Tindall had a big outing over the weekend, joining her family at the Burnham Market international horse trials in Norfolk on Saturday. While Mom competed in the annual event, big sister Mia Tindall, 5, played with her cousins Princess Charlotte and Prince George, who were attending with parents Kate Middleton and Prince William. But the older children made sure to periodically check in on their little cousin, who was bundled up in her stroller wearing a red jacket and colorful mittens.

The Queen’s great-granddaughter appears to have inherited her mother’s blonde locks and blue eyes. Lena’s light-colored hair was also in view at her christening last month as she was carried into St. Nicholas Church by her father. (Meghan Markle and Prince Harry, who are expecting their first child in the coming weeks, attended to celebrate Harry’s role as Lena’s godfather!)

Mia has already proven to be a doting big sister. At the Gatcombe Park Horse Trials last month, she took breaks from playing with big cousins Savannah Phillips, 8, and Isla Phillips, 6, to visit Lena in her stroller. Mia also rode on the stroller as Mike pushed his daughters around the field.

“They all seem very close,” an observer told PEOPLE of the young royals. “The Phillips girls seem very taken with their new little cousin, and I am sure they will with their new extra cousin when Meghan’s baby arrives.”

When they weren’t getting rides on their parents’ shoulders on Saturday – Princess Charlotte sat atop Kate, while Prince William gave Mia a lift and Prince George swung a toy sword above Mike’s head – the little royals got competitive. George and Mia stood face-to-face, appearing to determine who was taller. (It wasn’t very close, as the brim of Mia’s hat only reached George’s eyebrows!)

Prince Louis, who will turn 1 on April 23, appeared to stay home.

George and Mia have been playing together at polo matches, family gatherings and summer weddings since before they could walk. Nearly four summers ago, they were the center of attention at a polo game at Beaufort Park club, in Gloucestershire, when George – clutching a toy tractor – and Mia were among cousins playing on a grassy bank.

More recently, George, Mia and Charlotte were all in the adorable bridal party at Princess Eugenie and Jack Brooksbank’s October wedding. 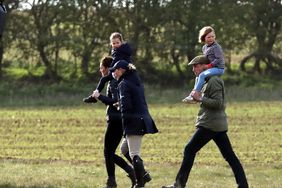 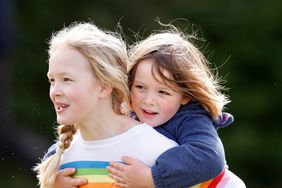