Kate's Magic: N.Y.C. Kids 'Thought She Was the Princess from 'Frozen' '

She might be a larger-than-life royal, but the Duchess of Cambridge magically managed to put a group of astonished children at ease.

While visiting the Northside Center for Child Development in Harlem on Monday morning, the duchess wasn’t afraid to get dirty, helping the children decorate picture frames for the holidays.

“She just got on her knees and worked with the kids,” the center’s executive director, Thelma Dye, told reporters. “She had glue all over her fingers.”

Apparently, her hard work and charm paid off.

“Kids know when you like them and when you don’t,” said Shahara Ahmad-Llewellyn, a member of the center’s board of advisors. “They absolutely opened to her.”

She added: “They thought she was the princess from Frozen.”

Like Princess Diana before her, the expectant mother, whose second child is due in April, has always shown an affinity for working with children.

Three years ago, Kate met Fabian Bate and wrote the cancer-stricken boy a letter praising his strength of character. His parents found comfort in the note after they lost him last month.

And since becoming a mom herself, her interest in working with kids only seems to have grown – from her visits to children’s hospices to her passion for arts education, Kate has demonstrated that she has a special bond with children.

“She is a down-to-earth person and so nice,” said volunteer Mary Dawkins, 71, who worked alongside Kate while wrapping. “She asked me if I had children and she said when she gets home she is going to have to wrap gifts for her son. She said she really loves it here and really loves the school.”

“She greeted as many kids as she could,” added Director of Development Nina Fenton. “I think she really enjoyed her visit. All of her aides had to pull her out of the room to move on.”

And the children felt the same way about her.

“I told her I want to be a paleontologist,” 11-year-old Ruben Cabrera said. “She told me I have a great future ahead of me and to keep on working hard.” 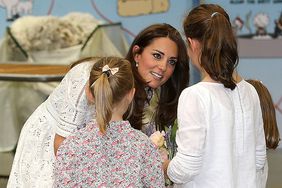 Inside Princess Kate's Visit to N.Y.C. 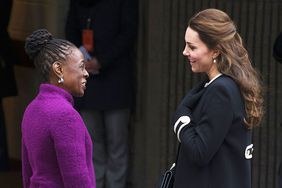