Normally known for her trademark suede boots or nude heels, the Duchess of Cambridge made a joke out of donning sneakers as she and William opened a new training facility for the England national soccer team on Tuesday.

Local Member of Parliament Andrew Griffiths met the couple at St. George’s Park, Burton-upon-Trent, and said, “I asked if she was going to come for a kickabout later. She said, ‘Have you got a pair of trainers I can borrow?’ I said, ‘It can be arranged.’ She just laughed.”

Sporting an autumnal gray coat by Reiss, Kate, 30, arrived at the $160-million complex by helicopter from London – and learning chopper lingo with her RAF pilot husband.

Aston Villa soccer team fan William, however, had something else on his mind. “I’ve got a quick question,” he asked the coaches. “I was just wondering if Aston Villa were ever going to win the Premiership?”

Touring the facility, William also quizzed some players relaxing in a small pool: “It’s quite cozy in there, isn’t it? How cold is it?”

Later, before officially opening the center, William also joked, as Kate grinned broadly, “I feel tempted to cry, ‘God for Harry, England and St. George,’ but I really don’t want lower the tone by bringing my brother into it.” 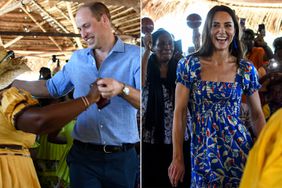