The royal mom of three, 37, admitted she’s feeling “broody” as she met an adorable 5-month-old baby during her and Prince William’s tour in Northern Ireland on Thursday.

William and Kate left their three kids, Prince George, 5, Princess Charlotte, 3, and Prince Louis, 10 months, back home in London while they took on a two-day tour in Northern Ireland.

And her kids weren’t far from her mind as she greeted well-wishers in Ballymena who had gathered to catch a glimpse of the couple. She told one little girl in a pink coat: “I love your cool coat. Charlotte loves pink.”

During a friendly soccer match with school kids on Wednesday, Kate hilariously revealed that her son George thinks her soccer skills are “rubbish.”

William also had a sweet moment with a group of kids who were “hatching” dinosaur eggs at Ballymena & Little Steps Sure Start — an organization that supports children’s physical and cognitive skill development.

The royal family is about to add one more little one to their brood. Meghan Markle and Prince Harry are expecting their first child in April.

Of the newest addition to their growing family, Kate previously said: “It’s such a special time to have little kiddies. And a cousin for George and Charlotte, as well, and Louis. It’ll be really special.” 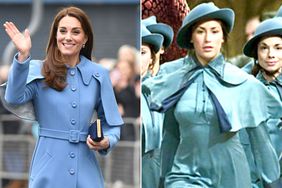