Looks like someone has been practicing for their brush with royalty!

Kate Middleton and Prince William received a very warm welcome on Tuesday to Evelina London, a special clinic that cares for kids with rare and complex conditions and helps support their families. The visit by the couple came as Kate was made a patron of the children’s hospital.

Helping to welcome them was 6-year-old Tiana Yales, who is being treated for sickle cell anaemia and was chosen to present a bouquet to the royal mom. After giving Kate the flowers and shaking her hand, Tiana smiled as she did a quick (and bouncy!) curtsy.The schoolgirl said she was “very excited” to have a special role during the royal couple’s visit.

Myka Meier, founder and director of Beaumont Etiquette, previously discussed the art of the curtsy. She said a curtsy should be subtle — a ballerina curtsy this is not — but the deeper and longer you pause shows more respect and formality. To curtsy, Meier instructs placing one leg behind the other (whichever one is more comfortable for you) and bowing your head slightly while bending your knees.

Meghan Markle debuted her own royal curtsy when she greeted Queen Elizabeth during Christmas Day church services outside the Church of St. Mary Magdalene last year – and has since become a pro, just like sister-in-law Kate.

In addition to Queen Elizabeth, Meier says Meghan is expected to curtsy to Prince Philip, Prince Charles and his wife Camilla Duchess of Cornwall. She’ll also be bending and bowing for Prince William and Princess Kate, due to his position in line for the throne.

The Duchess of Sussex must also curtsy to the princesses born into the royal family, Princess Anne, Princess Alexandra, and the daughters of Prince Andrew, Princesses Beatrice and Eugenie. However, if Harry is present, their roles are swapped and they must curtsy to Meghan.

While visiting the clinic, which is set to mark its 150th birthday next year, the royal parents spoke with staff and parents and met children as they took part in Christmas-themed fun. 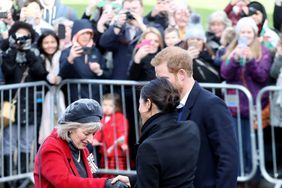 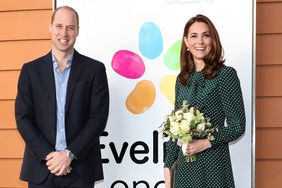 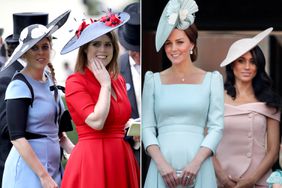 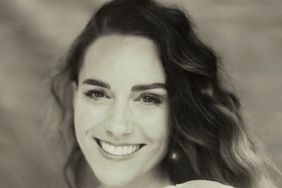