In honor of the annual holiday, which is celebrated in the United Kingdom this year on March 22, Prince William and his wife shared a sweet Instagram montage featuring a previously unseen photograph of the parents with their children. The tribute also included throwback photos of Kate’s mother, Carole Middleton, as well as William’s late mother Princess Diana.

The first slide showcased a photo of the couple with daughter Princess Charlotte, 4, as well as son Prince George, 6. In the sweet shot, Kate smiles as she gives their daughter a piggyback ride, while George takes a ride on his father’s back. Not included in the snap is the couple’s third child, Prince Louis, who turns 2 next month.

Next up was a photo that showed William and brother Prince Harry spending time with their mother, who died in 1997. In the photo, Diana sits with her arm around Harry as William gives his mother a hug around the neck.

The walk down memory lane also included a shot of Carole, 65, holding an infant Kate in her arms.

To top off the kind-hearted post, the proud parents also included a photo of George’s sweet Mother’s Day card.

“To mothers new and old and families spending today together and apart – we are thinking of you all at this difficult time. Happy Mother’s Day 🌷,” the post read, acknowledging the difficult situation many families around the globe face due to the coronavirus pandemic.

Earlier this week, it was announced that George and Charlotte — who are enrolled at Thomas’s Battersea — will be continuing their lessons at home moving forward.

The royal children will now move to “remote learning” and continue their lessons using online sources next week, their school said in a statement on Wednesday.

Also on Sunday, Meghan Markle and Prince Harry shared their Mother’s Day tribute. “No matter what you call your mum, this Mother’s Day in the UK, we honour the mums all over the world who do so much every single day, and now more than ever,” their caption read. 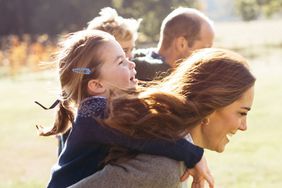 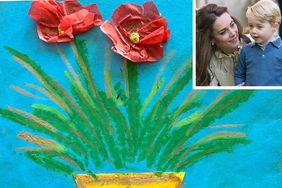 Prince George Is an Artist! Kate Middleton's Son, 6, Gifts Her a Handmade Card for Mother's Day