Prince William and Kate Middleton appeared in a Commonwealth Day broadcast on Sunday, just hours before Prince Harry and Meghan Markle's highly-anticipated interview with Oprah Winfrey is set to air on CBS.

For the appearance, the Duke and Duchess of Cambridge spoke with Dr. Zolelwa Sifumba, a frontline healthcare worker based in Johannesburg, South Africa.

Kensington Royal shared a snippet of the virtual chat on Instagram, writing, "This #CommonwealthDay The Duke and Duchess spoke with medical, charity and voluntary staff from across the Commonwealth to hear more about the work they have been carrying out to care for those within their communities."

Also on Sunday, Prince Charles spoke in-person at Westminster Abbey and praised the people throughout the Commonwealth during the ongoing COVID-19 pandemic.

"Amidst such heart-breaking suffering, however, the extraordinary determination, courage and creativity with which people have responded has been an inspiration to us all," Charles, 72, said.

Meghan and Harry's CBS interview is expected to cover Meghan's journey from stepping into life as a royal to marriage, motherhood, philanthropic work and facing intense public pressure. Harry, 36, will then join his wife, 39, to talk about their historic move to the U.S.

In a preview clip from the sit-down, Meghan addressed how the royal family may feel after hearing her truth.

"I don't know how they could expect that after all of this time, we would still just be silent if there is an active role that the Firm is playing in perpetuating falsehoods about us," Meghan said — "the Firm" referring to the institution of the royal family. "And if that comes with risk of losing things, I mean I — there's a lot that's been lost already."

Last Wednesday, Buckingham Palace announced that it will be launching a probe into bullying allegations against Meghan that were first reported by The Times in the U.K. earlier this week — something her office has strongly refuted.

In response to the legal letter to The Times, which reportedly said the newspaper was being "being used by Buckingham Palace to peddle a wholly false narrative" before the Oprah interview, a source told PEOPLE, "It is unfair, untrue and disingenuous to say that the palace is coordinating this."

There "are far more important things we are focusing on," a source added, referring to Prince Philip's illness and his ongoing care following a heart procedure, the calls that the Queen has been making about vaccinations and the ongoing business of state.

Apart from confirming that they didn't know about the Oprah interview before the news was broken, the palace hasn't commented on what is in the interview.

Oprah with Meghan and Harry airs Sunday at 8 p.m. on CBS. 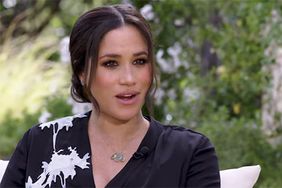 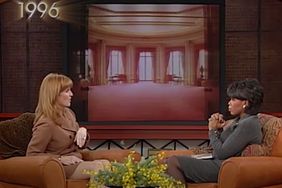