Kate Middleton once again raised the bar for looking glamorous on maternity leave when she arrived at Prince Louis’ christening on Monday.

For the occasion, she wore an Alexander McQueen dress with a structured shoulder detail and a dramatic Jane Taylor headpiece fit for a princess. The mom of three also wore McQueen (her wedding dress designer!) for the christenings of Prince George and Princess Charlotte.

Princess Kate has only stepped out a handful of times since giving birth to Louis in April. She made her first post-baby appearance on her way to Prince Harry and Meghan Markle’s wedding rehearsal, and she, of course, attended the big day itself on May 19.

Since then, she’s brought her impeccable style to Trooping the Colour on June 9, and a day later, she was spotted wrangling — while wearing heels — 4-year-old Prince George and 3-year-old Princess Charlotte on the sidelines of Prince William’s polo match.

Princess Kate looked the most elegant for Prince Louis’ big day, which echoed her style choices of christenings past. Similar to today’s ensemble, at Charlotte’s in 2015, she went all white, while in 2013, at George’s, she opted for nude — almost the same color as the heirloom gown both babies wore.

Prince Louis and his older brother were christened in the same place, the Chapel Royal in St. James’s Palace, whereas Charlotte’s took place in Mary Magdalene Church in Sandringham. The Archbishop of Canterbury Justin Welby led the ceremonies of all three children.

Kate recently opened up about loving the simple moments with her children. “Spending quality time together is such an important aspect of family life,” she recently wrote in a letter for Children’s Hospice Week. “It is the simple family moments like playing outside together that I cherish.” 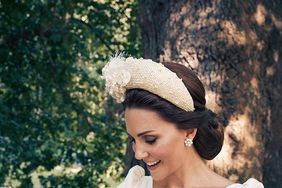 That Smile! Prince Louis Is the Happiest Baby in Newly Released Christening Portrait with Mom Kate