Are Kate & William Expecting a Daughter?

Handed a teddy bear, the Duchess started to say the D-word, or did she?

It could be the mother of all hints. In an unguarded moment Tuesday, the Duchess of Cambridge may have dropped a hint about to the sex of her royal baby?

Certainly, one well-wisher on Kate’s visit to the northern English town of Grimsby clearly thinks so.

Moments after Kate, 31, received the gift of a teddy bear from a member of the crowd outside the town’s fishing museum, Sandra Cook, 67, says she heard the mum-to-be utter the words, “Thank you, I will take that for my d-…”

To which a radiant-looking Kate replied that the couple don’t know the sex, and, “We’re not telling.”

The British media have made the most of the brief encounter. The best-selling Sun tabloid headlined its story with “One’s D” – while rival Daily Mirror called it with more certainty: “It’s A Girl!” Even the staid The Times joined in, saying, “Has the Duchess given the game away?”

What is certain is that Kate became a role model princess for those she met at a school in the town. Greeting flag-waving pupils and chatting at length, and in detail, about art and photography with students at Havelock Academy, she won even more admirers.

Nirvana Parker, 17, showed Kate her photography. “She is certainly someone to look up to,” Parker said. “Everything about her – she comes across as lovely. She seemed like a normal person and spoke to us in a way that anyone would want to be spoken to.”

At the academy, where Kate officially opened a new building, she also revealed something else: an apparent hint of a craving for cupcakes.

Accepting a crown-shaped biscuit with “Kate” written in icing, she remarked on the “delicious” cooking aromas in the classroom. Food technician Sharon Swales said afterward, “She said, ‘I bet you are lucky enough to cook cupcakes.’ She said ‘delicious’ about 10 times.”

For more on the buzz around the royal baby, pick up this week’s issue of PEOPLE, on newsstands Friday

PHOTOS: William and Kate: In Love . . . with Children! 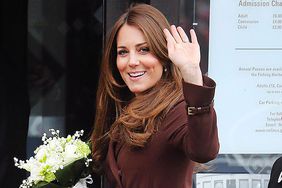 Royal Baby Buzz: A Little Princess on the Way? 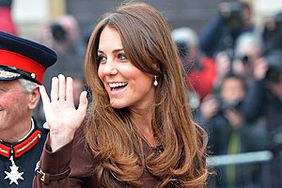 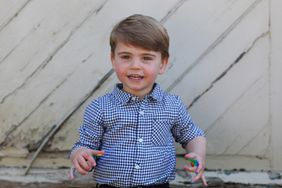